You may have noticed, we think a lot about the value of public transportation around here. So we paid extra attention when the Inquirer and Billy Penn introduced a fascinating series on the importance of the El to Philadelphia. Weekday ridership on the El (officially, the Market-Frankford Line) has increased by 20% since 2001, and the population in the adjacent Census Tracts boomed by 7.4% between 2000 and 2014, versus 2.8% for the rest of the city. Looking at The El’s path from west to east, it embarks from West Philly, cuts through University City and Center City, heading north up into Northern Liberties, Fishtown and Kensington, finally arriving in Frankford.

The Inquirer and Billy Penn looked at population change, but another way to look at an “engine of growth” is through home values—and the ESI Philadelphia Housing Index (PHI) is a useful tool to add to the conversation. What has happened to housing prices along this route? Interestingly, there’s no one answer, and in many ways the neighborhoods along the El tell an extreme version of the story of the city as a whole. I dug into our PHI, now updated through the end of February, to get a clearer sense of how the Market-Frankford Line impacts Philadelphia.

Join us for an El ride along the PHI. 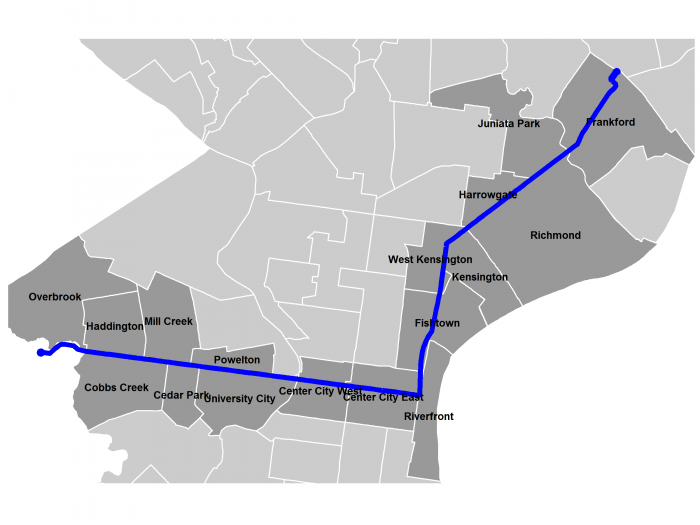 Our ride along the El begins in the West Philly neighborhoods of Overbrook, Haddington, Cobbs Creek, and Mill Creek. These neighborhoods have not experienced the “Market-Frankford Line Boom”.

Overbrook, Cobbs Creek, Haddington, and Mill Creek are all neighborhoods where prices remain stably below the city average. They were hit harder by the Great Recession than the rest of the city (notice a dip in all of them from 2007 to 2012), which only exacerbated the fact that they already lag the city as a whole. Notably, the ridership at these stations also lagged the growth of the whole route. According to Billy Penn, 63rd and 56th St. Stations saw about-average growth of 32% and 30%, respectively, while 60th and 52nd St. Stations were two of only five stations that lost ridership since 2001. 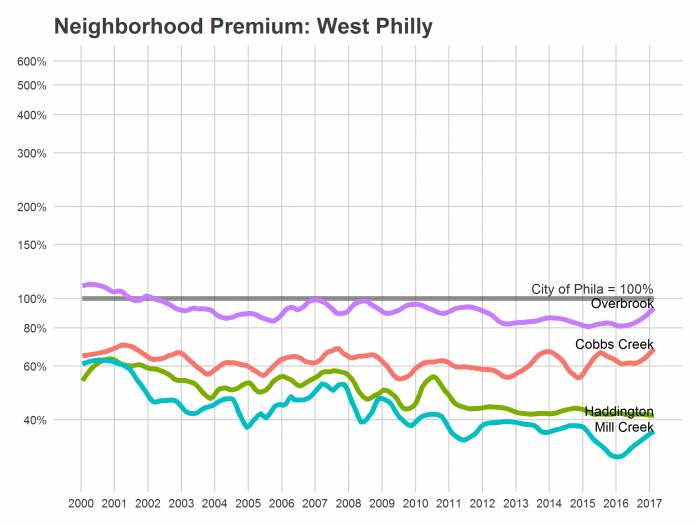 The El next rides into the gentrifying neighborhoods around Penn and Drexel: Cedar Park, Powelton, and University City. 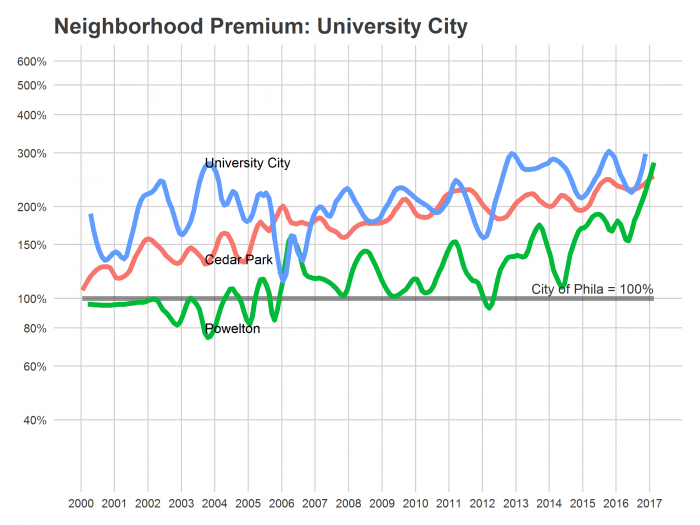 Housing prices in these neighborhoods have boomed over the last decade and a half. Cedar Park experienced the steadiest growth, from having prices at the city average, to receiving a +151% premium in February 2017. Powelton was later to the game, but the premium growth since 2012 is striking. The stations in these neighborhoods—46th, 40th, 34th, and 30th Sts.—all saw increases in ridership from 10 to 34%, which is modest only when we see what happened at the other end of the line.

The El dives under the Schuylkill River, and comes up in Center City. These neighborhoods have long been Philadelphia’s most expensive, and residents consistently pay about 400% more than the rest of the city. We include in these neighborhoods the Riverfront, along the Delaware River. Ridership is up at 15th, 13th, and 2nd St Stations, while it’s down at 11th, 8th, and 5th. This is mostly due to business patterns, and probably not all that representative of residential trends in the neighborhoods. The closing of the Gallery may have single-handedly driven down the ridership of 11th and 8th, though proximity to the El will likely factor into the upcoming Gallery rebirth. 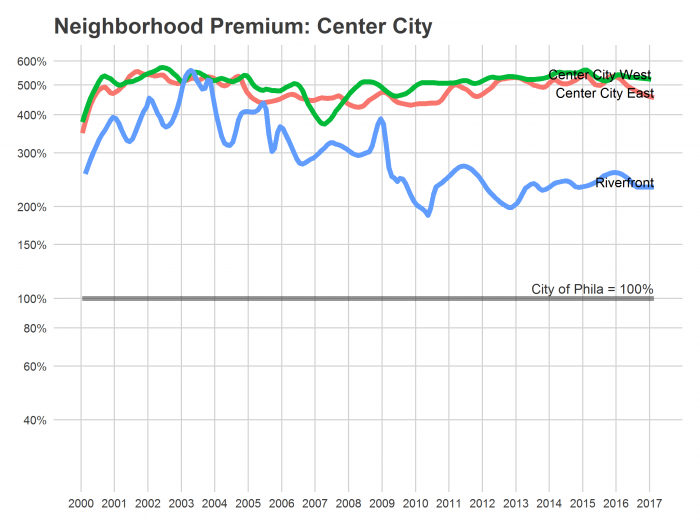 Leaving Center City, the El turns north and heads into Fishtown and Kensington. These are the neighborhoods that experienced the largest price booms in the last two decades, and have seen similarly enormous ridership growth. Both Fishtown and Kensington entered 2001 with below-average prices, but remarkably steep, steady growth means that residents of Kensington now pay an 84% premium, and residents of Fishtown a 134% premium. Ridership at Spring Garden and Girard stations is up 52 and 75%, respectively, while ridership at Berks, in the heart of Kensington, is up an astounding 214%. 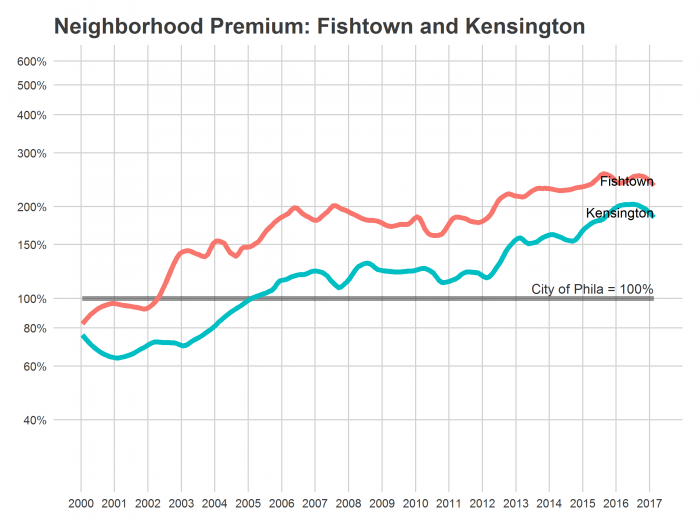 Finally, we pass into the Northern River Wards and North Philly, whose neighborhoods include Richmond, Harrowgate, and the El’s namesake, Frankford. These neighborhoods provide perhaps the most interesting juxtaposition in our analysis. Ridership is booming along these stops, 29% or better growth at all nine stops, including unreal 126% and 155% growth at Church St. and Huntingdon. This change in ridership culture has not, however, coupled with booming housing prices, as it has at all other points on the line. 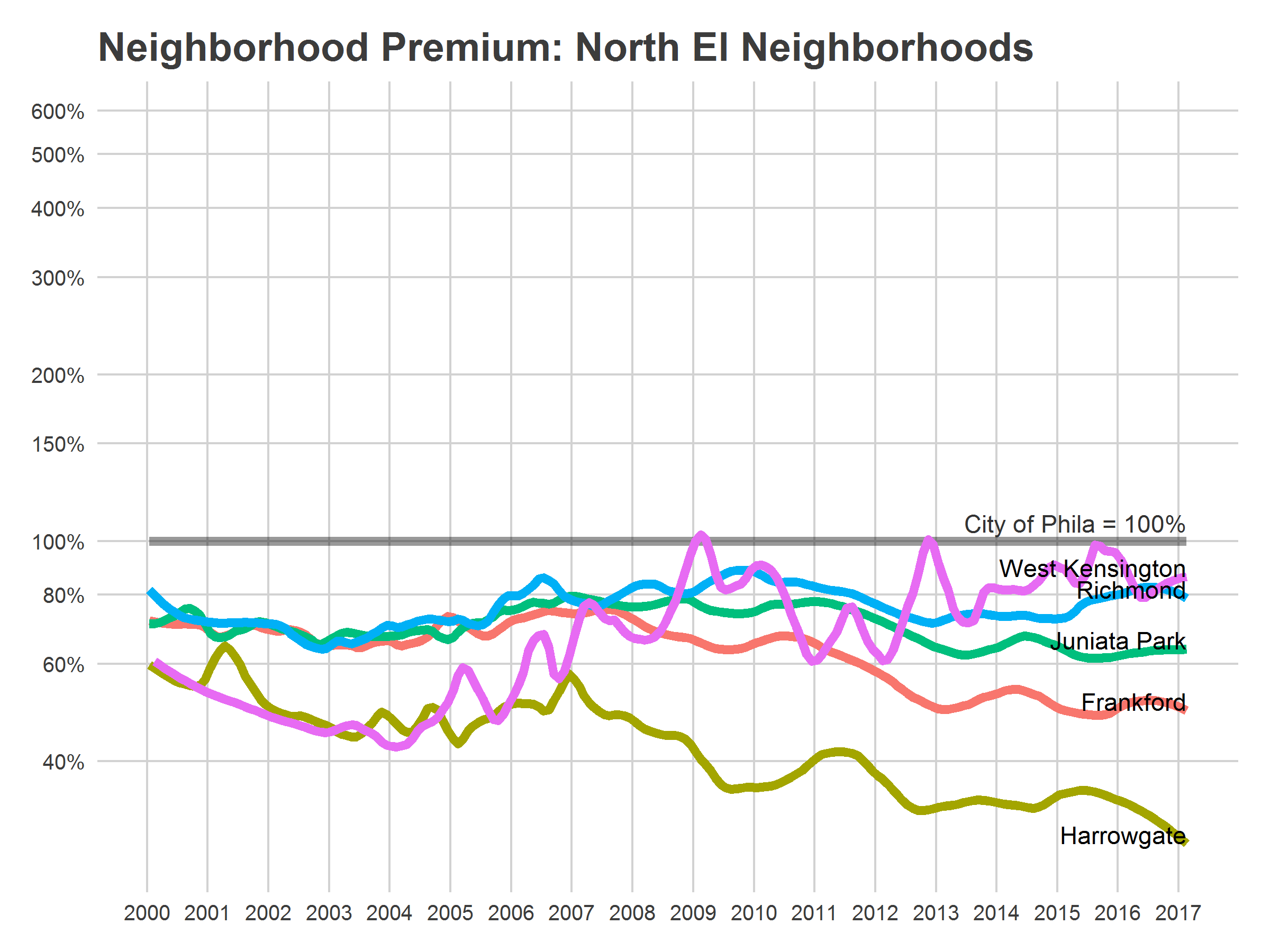 Every neighborhood along this stretch lags city prices. West Kensington, to the west of the El from our Kensington boundaries, has seen the largest price growth over the last 14 years, but started from such a low point that it is still now only about city-average. Juniata Park, Frankford, and Harrowgate experience some of the lowest prices in the city, and have only fallen farther behind over the last decade.

The Market-Frankford Line forms a backbone of Philadelphia’s transportation, and helps drive price growth and employment opportunities. The Broad Street Line, which travels through South Philly, Center City, and up North Philly, past Temple, has done some of the same, albeit with less stark results. (Though a group of New York-based real estate investors are betting that they can use the line to instigate some huge changes). 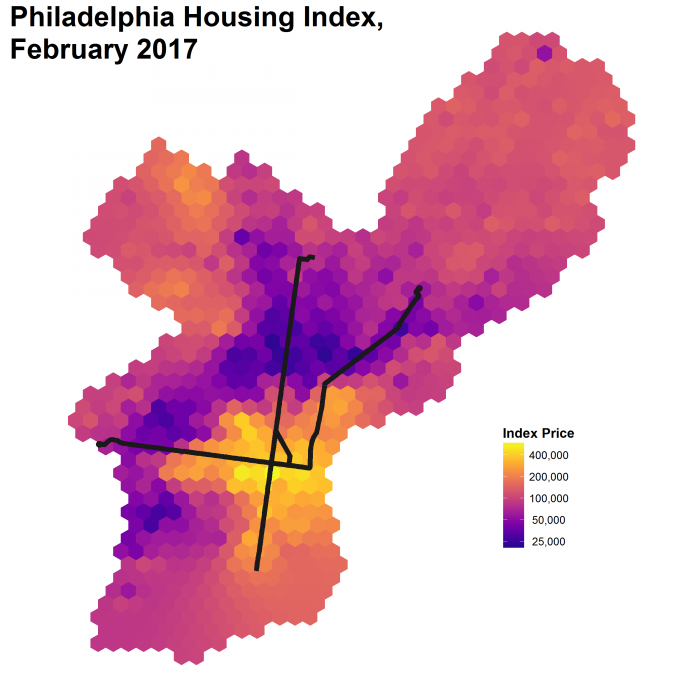 Glancing at the heat map of our index, you can identify branches of price growth extending out from Center City. You can even make out the exact path of the El just in the prices, from West Philly, to Center City, up through the River Wards. And the heat extends out along the Broad Street Line up past Temple, and down into South Philly.

In many ways, perhaps the most surprising hot neighborhood, from a transportation perspective, is that little nook of heat to the north and west of Center City. That hot spot is Fairmount and Brewerytown, and it seems to have grown despite no access to the rail lines that other neighborhoods enjoy. Of course, this neighborhood has a lot going for it—easy access to the Art Museum, quaint houses, a deep food scene—but it is the neighborhood that perhaps most outpaces its subway access. Residents of the neighborhood probably won’t find this surprising, whether they’ve spent hours trying to find a parking spot at night or they daily commute on one of the well-used bus routes down to Center City.

The Inquirer and Billy Penn focused on the growth around the El, so we can instead focus on the change in the PHI from 2001 to 2017. The PHI shot up in the neighborhoods just around Center City, in South Philly, University City, and Fishtown. Interestingly, the Fairmount and Brewerytown neighborhoods didn’t see the same growth that those rail-adjacent neighborhoods did. It does indeed appear that, at least for the neighborhoods adjacent to Center City, the Market Frankford and Broad Street Lines informed where home values rose, and where they didn’t, over the last 16 years. 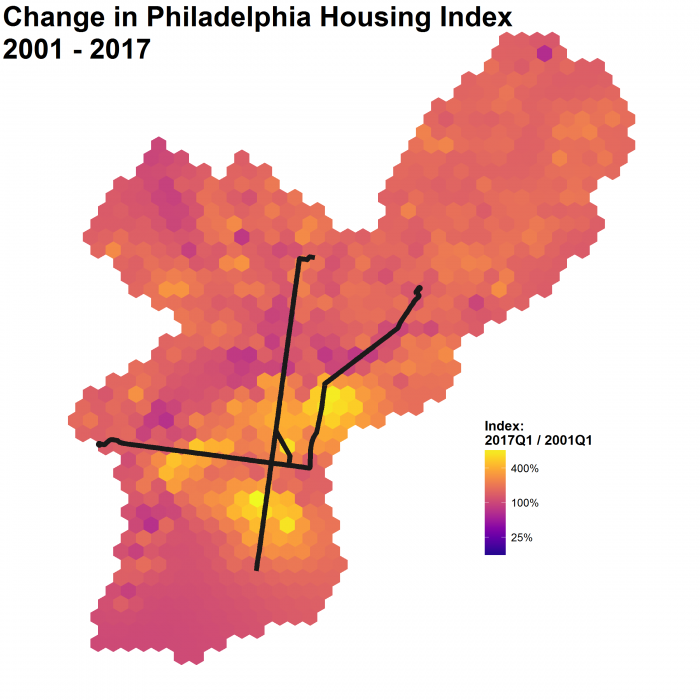