The Navy Yard is a great American landmark that has been transformed into the most successful commercial redevelopment of a former military facility anywhere in the country. Its legacy as a major economic driver is restored through the proactive interventions by PIDC, and today the Navy Yard is a campus of life sciences and technological innovation, industry and manufacturing, and retail and hospitality, and is one of the region’s most vibrant employment hubs.

During its peak in World War II, the Philadelphia Naval Shipyard employed 40,000 people. After operating for 120 years, the Philadelphia Naval Shipyard officially closed in 1996. With a large piece of industrial heritage and economic production closed, PIDC, on behalf of the City of Philadelphia, acquired the former naval shipyard in 2000 and commenced the effort of transitioning the site to new uses. PIDC invested significantly in infrastructure at the Navy Yard, and in 2004 commissioned the first Master Plan for the Navy Yard.

In 2020, ESI was hired by PIDC to evaluate the economic impacts of the redevelopment of the Navy Yard.  Since 2002, PIDC’s strategic business attraction effort has led to $1.7 billion in construction at the Navy Yard, with more to come with the potential redevelopment of the Mustin and Historic Districts. In total, the redevelopment has resulted to the return of significant employment to the Navy Yard, with 15,000+ employees now working in a diversity of jobs, including defense, life sciences and biotechnology, medical services, education, finance, and manufacturing—sectors strategically important for the Philadelphia economy. 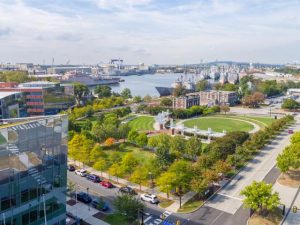