Green City, Clean Waters (“GCCW”) is an initiative of the Philadelphia Water Department that seeks to invest in green stormwater infrastructure (GSI) projects throughout the City of Philadelphia. GCCW is currently in Year 5 of a 25-year program.

The report shows that the implementation of GSI projects has produced significant economic impacts to the City of Philadelphia, the local economy and real estate markets, as well as the City’s neighborhoods.  The initiative makes Philadelphia a national leader in municipal water management. GCCW is potentially saving the City billions of dollars over the 25-year period by dealing with stormwater on-site green infrastructure solutions that invest in neighborhoods throughout the City. The GSI industry in Philadelphia generates an economic impact of $57 million, supporting 430 additional jobs and generating $860, 000 in tax revenues to the City of Philadelphia. As a growing industry with increasing importance, further significant impacts will accrue.

The public and private investments made because of GCCW represent an additional boost to the local economy of $3 billion, supporting 940 jobs annually and generating $48 million in tax revenues for the Philadelphia government.

Further, these investments produced ecological, aesthetic, recreational, and social gains in neighborhoods throughout the City. ESI’s spatial analysis showed an increase in the value of homes that were in proximity to public GSI projects, concluding that they were beneficial to residential neighborhoods. 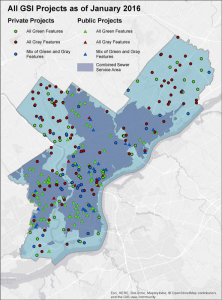