The Economic Impact of Montana Film Production: An Analysis of the Industry and the MEDIA Act, 2019-2020

The production of feature films, television series, and commercials can generate significant economic activity for their host communities, drawing out-of-town spending, generating jobs, and supporting local businesses. Because of this potential boost to local economies, many states provide incentives to attract productions as an economic development initiative.

In 2020, the Montana Film Office retained ESI to quantify the economic impact of Montana film production and the Montana Economic Development Industry Advancement Act (MEDIA Act). The MEDIA Act was created to provide a transferable income tax incentive to attract film, television and other media production to the State.

Our report provided an analysis of the economic, fiscal, and societal impacts from film and television production in the State and specifically evaluates the impacts associated with the MEDIA Act Tax Credit Program. Impacts were evaluated for film, television, and other production activity over an 18-month period (January 2019–June 2020).

The benefits to local communities from the film and entertainment industry are considerable. When a production shoots on location, it brings jobs, revenue and related infrastructure development, providing an immediate boost to the local economy. Beyond these immediate impacts, productions that take place in Montana play a critical role in helping to shape the cultural image of the State. 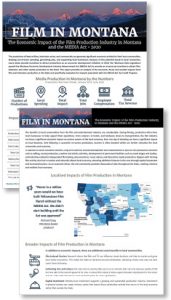