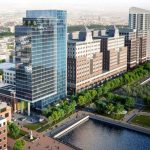 The results of one of our most recent reports analyzing the economic impact of a proposed Hilton Hotel in Hoboken, New Jersey were recently featured in the real estate publication, Jersey Digs. The article revealed that the new hotel would create 700 jobs and generate $21.4 million annually in guest spending.

Econsult Solutions, Inc. (ESI) was retained by KMS Development Partners, LP in order to study and review the economic impacts associated with this brand new Hilton hotel, which would be a 20-story, 283 room property in Hoboken, New Jersey. In August 2016, ESI estimated the impacts regarding the construction and operation of a hotel at the site of the Frank Sinatra Post Office in Hoboken. At the time, KMS projected the hotel would only retain 264 rooms and cost about $110 million. However, by October 2016, the project size expanded to 283 rooms and ESI updated the economic impacts of ongoing operations and visitor spending to compensate the hotel’s new size.

Specifically, ESI looked at the impacts of three aspects of the proposed hotel development:

ESI estimated that the hotel would produce over $21 million in expenditures with 120 supported jobs in Hoboken annually and over $49 million in expenditures and 430 supported jobs in New Jersey annually. The project tax benefits would also provide over $1 million to Hoboken City & School Taxes annually and over $3 million to NJ State Taxes annually. The development would also benefit the job market by creating 500 total construction jobs and 120 permanent jobs.