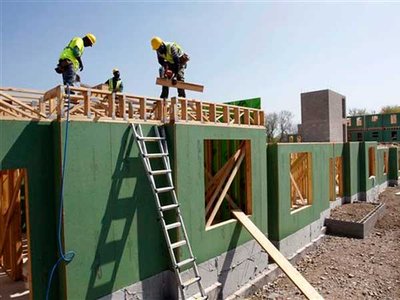 IN A NUTSHELL: “With permits outstripping construction, look for a rebound in housing starts over the next few months.”

WHAT IT MEANS: New home construction plummeted in April, so should we worry? Not me. It’s not as if weather doesn’t matter as we saw yesterday with the industrial production number being whipsawed by utility output. So let’s not get too crazy about the drop in housing starts. Indeed, it is hard to explain a 28% drop in the South to a level not seen since last August. Has the housing market really dried up there? I doubt it. There was a double-digit decline in starts in the Northeast and a smaller fall off in the West with only the Midwest showing a gain. It is worth noting that the first number to exceed one million units annualized in nearly five years was posted in March. Also, for the first four months of the year, starts are up 29% compared to the pace posted in 2012, so it would be asking a lot to expect an even larger increase. And finally, permit requests soared over the one million-unit level and they are running above starts. As I have pointed out on a number of occasions, you need to watch the permit requests since developers are not spending the money unless they are pretty sure they will be building the houses. Indeed, the April jump in units authorized but not started is a clear indication that we should see a rebound in construction next month. The solid pace of construction so far this year has increased the supply of homes on the market and with inventory being an issue in the existing home market, that could lead to stronger new home sales.Jobless claims surged but that also may be a non-event, maybe. These numbers are hugely volatile and the four-week moving average rose only modestly. However, with sequestration layoffs starting to kick in, maybe there is something here to look at more closely. I don’t worry about one month increase or decrease but we have been looking for signs that sequestration is hurting and this may be the first one. We shall see over the next couple of months if that is the case.

MARKETS AND FED POLICY IMPLICATIONS: The falloff in construction and the rise in jobless claims are not what anyone wants to see. The markets, especially the bond market, have started to price in a rebound in growth. But the hurdles of tax increases and sequestration are still to be cleared and the impacts are likely to be felt more and more over the next few months so any sign of slower growth is something to watch carefully. How will investors react? These are data that argue for continued Fed aggressiveness so that is generally good. But whether that outweighs the weakness in the numbers is another issue. As for me, these numbers tell me little as they seem to be just the usual ebb and flow of volatile data.

via Housing starts slowdown only temporary.