If you haven’t been to Wilmington, DE recently, it’s time for a visit!

Despite its prime location and affordability, Wilmington, DE is often overlooked. Nestled between Philadelphia and Baltimore, the city is at a tipping point. Wilmington is following a trend of many American cities that are revitalizing their downtowns and recreating their profiles. Local leaders are capitalizing on renewed interest in urban living to bolster downtown and other neighborhoods in the city.

The city boasts great access, beautiful parks and public amenities and is an affordable destination for both businesses and residents. The house I recently bought located on a state park would easily cost three times more in my old neighborhood in DC. Yet, attracting new investment hasn’t been easy. There is nearly $450M of new investment in the pipeline (recently completed or in construction) including two new hotels, nearly 2,000 new multifamily units (new and renovated units), five new restaurants and signature entertainment uses. This includes the 76ers Fieldhouse, a state-of-the-art, 140,000-square-foot, multi-purpose sports complex and youth training center on the Wilmington Riverfront (under construction) and DECO – a chef driven food hall by Buccini/Pollin Group, soon to open at the newly renovated Hotel DuPont.

Complementing the private development is the investment in infrastructure throughout the city including green spaces such as the Rock Lot – a pocket park (Figure 1) in the city’s Creative District[1], and the planned multi-million dollar overhaul to Rodney Square, a gem of a park in the heart of the city’s downtown business district.

Enhancements to transportation infrastructure are enriching the city’s connectivity. The Mayor’s Office worked with SEPTA to increase the number of commuter trains between Wilmington and Center City, Philadelphia, and they also have their sights on additional increases to accommodate the growing workforce. Amtrak’s planned expansion of the Acela Express could result in a high-speed train every half hour by 2023. Delaware’s newest greenway/trail, connecting the Wilmington Riverfront and historic New Castle, was completed in September. Speaking of commuters, the city is currently developing an updated City bike plan that will propose a network of bike lanes and bike-friendly streets that will make bike commuting through the City safer and more comfortable. This planning effort comes on the heels of the installation of a mile-long bike lane on Union Street, a major neighborhood commercial corridor. This is Wilmington’s longest bike lane so far, and it was part of a project that removed one vehicle traffic lane to make the street feel more pedestrian-friendly.

Mayor Purzycki’s Administration, along with local and state economic organizations, are working to assure the city remains competitive.  Interface and ESI, are putting the final touches on a new comprehensive plan that will establish a framework for future growth. The city has a creative tool box of incentives including a variety of local and state financing programs (loans and grants) that they are leveraging to attract new businesses and investment.

Technology as an Economic Driver

There is a growing cluster of innovation and technology businesses downtown. Over 75 tech and creative companies (Figure 2) call downtown Wilmington home, many of which are located in The Mill, a co-working space, which is tripling its footprint from 13,000 to 30,000 square feet in less than two years. Developed by Rob Herrera, formerly an architect for WeWork, The Mill has become a hub of innovation and creativity, home to companies such as ZipCode. In addition to hosting companies, The Mill fosters collaboration and education with a robust series of programs and talks.

Fintech (financial technology)—an economic driver in Delaware, is an increasingly important part of this mix. Governor Carney and the Delaware Prosperity Partnership, who continually promote Delaware’s role in supporting and growing this emerging industry, are helping to drive this cluster into downtown. Delaware is already a hub for financial services — employing nearly 10% of Delaware’s workforce—more than double the national rate. Financial services accounts for one-fifth of Delaware’s GDP[2]. The disruptive innovation of fintech continues to attract investment from venture capitalists as well as traditional banking systems. With Delaware’s bench strength in finance, business services and business-friendly tax structure, fintech is positioned to continue as a driver of economic growth in Delaware.

Downtown by the Numbers

Thoughtful planning and investment is yielding metrics to note. Over 40.9% of the workforce in the core has at least a Bachelor’s degree[3]. 67% of the jobs are concentrated in finance, insurance, healthcare, professional, scientific and technical service. Average wage for available professional jobs downtown is $75,000[4]. Multi-family residential occupancy exceeds 90%. 565 new units were delivered in summer 2018, and the new product has top of line amenities that appeal to Millennials and empty nesters. Residents living in downtown are younger, better educated, and have a higher disposable income than in other neighborhoods. They also walk a lot — downtown Wilmington has a Walk Score of 96, competitive with neighborhoods in Center City Philadelphia and Washington, DC. 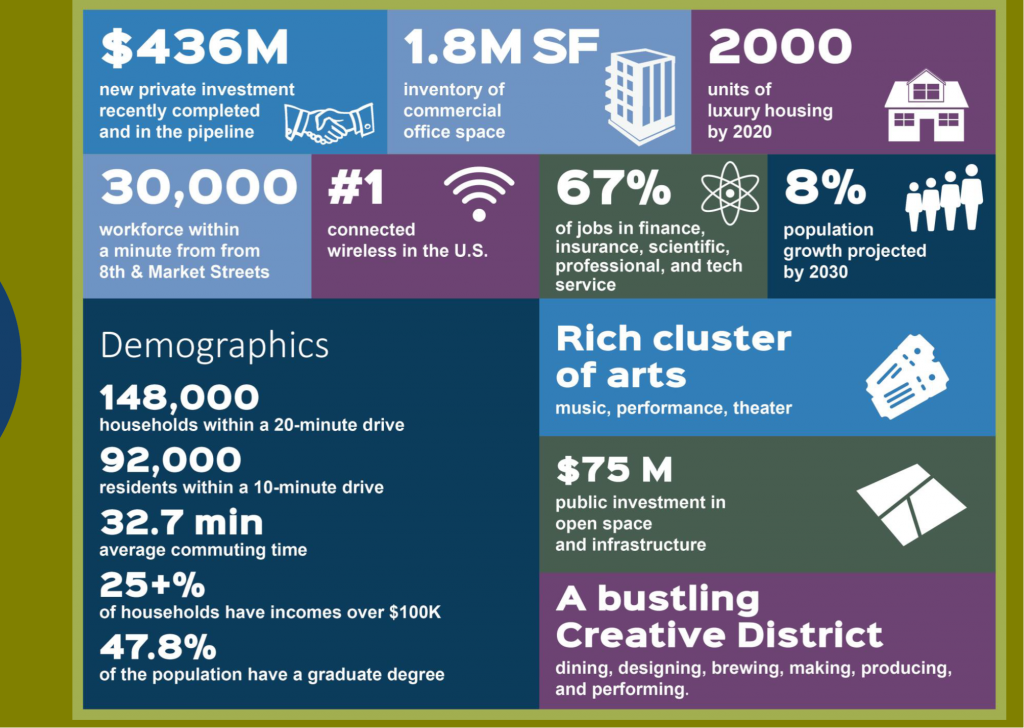 Catherine Timko is the founding principal of The Riddle Company, a Washington, DC-based economic development marketing firm, as well as a Senior Advisor at Econsult Solutions. Retail attraction is one of her specialties. Catherine has completed retail marketing and attraction strategies for almost every major market on the East Coast including Miami, Atlanta, Washington, Baltimore, Philadelphia, Newark and Boston.