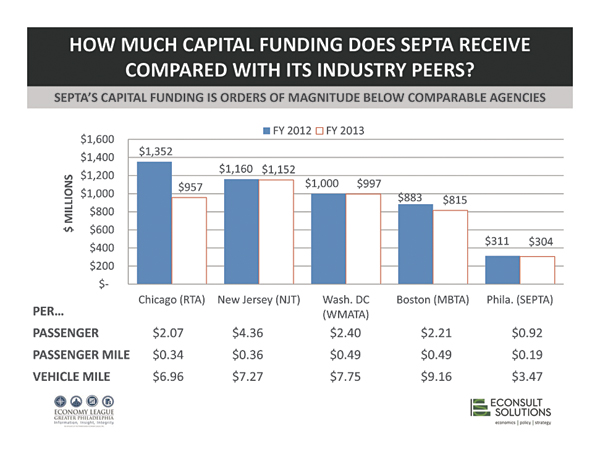 “SEPTA has a major economic impact on the Philadelphia region and the state as a whole, but these benefits could be lost without new resources to fund vital improvements and other needs throughout the aging transit system, according to a new study.

The new report, “Understanding SEPTA’s Statewide Economic Value”, from the Economy League of Greater Philadelphia and Econsult Solutions, examines the Authority’s stewardship of public funds, performance, and economic and fiscal impacts in the context of transportation revenues and expenditures in the region generally and in comparison to those of industry peers and commonwealth agencies.

“As the legislature considers transportation funding proposals, the information in this report provides context and comparisons to other systems that demonstrate SEPTA’s importance to our region,” Wray said.

According to the report, SEPTA provides more value for the funding it receives than other agencies statewide based on ridership. SEPTA recorded 339.3 million trips last year, a 23-year high. At the same time, the money available for improvement projects is at a 15-year low due to a 25% reduction in capital funding from the state.

SEPTA’s capital budget, which funds vital expenditures such as infrastructure improvements, repairs and new vehicle purchases, has remained at approximately $300 million over the last several years. This is also considerably less than the funding provided to similar-sized transit agencies across the country, such as WMATA in Washington, D.C. ($1 billion capital budget), Boston’s MBTA ($800 million) and NJ Transit ($1.1 billion). The report found SEPTA has made efficient use of its state and federal capital funding. SEPTA needs approximately $452 million in additional annual capital funding to address its state-of-good-repair needs over the next 20 years.

SEPTA’s significant impact on the regional and state economy should also be kept in mind as work continues on a transportation funding solution. According to the report, SEPTA supports nearly 26,000 jobs, generates $62.5 million in state tax revenue and contributes $3.21 billion in economic impact.

Over the long-term, however, SEPTA will not be able to provide these economic benefits without an infusion of new resources, the report warns. The Authority would have to gradually shrink the transit system and eliminate services to make ends meet.

The impact of these moves would be felt well beyond the 1.2 million riders who rely on SEPTA every day. The Philadelphia region would gradually experience dramatic erosion in jobs, tax revenues and property values as its dense, economically productive urban core becomes unattractive to businesses and residents. There would also be a major impact statewide, with the Commonwealth would suffering from the losses in its most economically productive region as businesses and residents generate less tax revenue and move elsewhere.

“This analysis shows how important it is to the regional economy and the Commonwealth as a whole to fund SEPTA adequately,” said Econsult Solutions President Richard Voith. “SEPTA has proven to be an exemplary steward of public funds and continues to be a wise investment for the state.””

via SEPTA FUNDING CRISIS: Everyone Will Suffer! | Philadelphia Public Record.

Public Transportation is Needed to Maintain an Equitable City