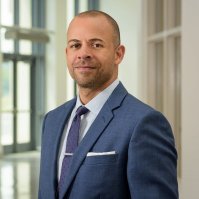 In a newly created role at one of the oldest and largest human service organizations in the country, Jeremy leads the strategy for and management of Elwyn’s growing multi-state real estate portfolio through oversight of development, leasing, acquisitions, dispositions, asset management, facilities operations and capital and master planning. He is currently developing a real estate strategy for the organization focused on master planning Elwyn’s nearly 300-acre Media Campus, establishing a new headquarters location and monetizing excess real estate.

Prior to joining Elwyn, Jeremy was Director of Real Estate at the University of Delaware where he responsible for all real estate issues within the University’s 8.5 million square foot portfolio, including acquisitions, dispositions, leasing, development, asset management and strategy. He also led the development of UD’s 272-acre Science, Technology and Advanced Research (STAR) Campus in part by negotiating the development of a $45MM, 120,000 square foot building to expand it.

At Rowan University, Jeremy served as Assistant Vice President of Business Operations and Real Estate—a position he helped to create. In this capacity, he oversaw the administration of the University’s largest non-academic operational and capital budgets, led the Division’s business operations and strategically managed Rowan’s 3.5 million square foot real estate portfolio.  Among Jeremy’s accomplishments was successfully leading negotiations with a private developer for a $145MM, 1,415 bed student housing complex on Rowan’s Main Campus, which was the first on campus public-private partnership in the University’s history. While at Rowan, Jeremy led the creation of a development strategy for the South Jersey Technology Park at Rowan University, a planned research park on 300 acres of land just off of Rowan’s Campus.

Jeremy also served as Director of Project Management at the New Jersey Casino Reinvestment Development Authority (CRDA), a quasi-public economic development agency financed through reinvestments of casino industry revenues. During his tenure, Jeremy negotiated approximately $53MM in transactions representing over $300MM in development and managed CRDA’s key initiatives in the areas of real estate development, strategic investment, workforce housing and transportation.  Among the transactions that he negotiated was a $10MM financing for Teacher’s Village, an innovative urban development project in Newark, New Jersey. At the time, this constituted the largest loan commitment in CRDA’s history. Under his leadership, Jeremy’s department developed a real estate strategy for Atlantic City focused on generating investment in the downtown by leveraging the city’s health care, higher education and arts and cultural assets to drive development.

Jeremy’s relationship with CRDA began while he was a consultant with Jones Lang LaSalle Americas, Inc. (now JLL), one of the largest real estate services and investment management firms in the world, where he was charged with developing business and managing projects within the Philadelphia market. He played an integral role in JLL’s successful pursuit to serve as advisor to the CRDA on the redevelopment of Atlantic City’s former airport, Bader Field, a site then valued at $1 billion.

Before returning to the private sector, Jeremy served as a Strategic Investment Officer (SIO) for the Commonwealth of Pennsylvania in the administration of Governor Edward G. Rendell. As a principal member of the Governor’s Community Action Team, Jeremy managed the financing and administration of real estate development and infrastructure projects throughout Southeastern Pennsylvania. During his tenure Jeremy helped develop the investment strategy that was a hallmark of the Governor’s Economic Stimulus Plan, an approach recognized by Harvard University’s “Innovation in American Government” competition.