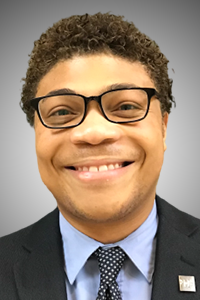 Dr. Labaron Lenard-Palmer is an Associate Director at Econsult Solutions, Inc. (ESI). His areas of expertise include spatial analysis, government policy, urban geography, and economic development initiatives. He is proficient in ArcGIS, qualitative analysis, regression analysis and Excel. At ESI, Dr. Lenard-Palmer works in the areas of Government and Public Policy, Economic Development and Transportation/Infrastructure.

Prior to joining ESI, Dr. Lenard-Palmer worked with the City of Philadelphia in several positions. Most recently he was a Senior Policy Analyst with the Development Services division of the Planning and Development Department, also serving as an Historic Commission designee. Previously, he worked as the American Street Empowerment Zone Manager with the Commerce Department of Philadelphia in 2012.

Dr. Lenard-Palmer received his Doctorate degree in Geography and Urban Studies from Temple University, also earning a graduate certificate in Teaching in Higher Education in 2018. In 2010, he received a Master of Arts degree in Geography with a concentration in Urban Planning from West Chester University of Pennsylvania. In 2007, he received his Bachelor of Arts in Geography and Urban Studies with a certificate in Political Economy from Temple University. He has participated as an adjunct instructor teaching courses in Digital Mapping and Environmental Policy Analysis.