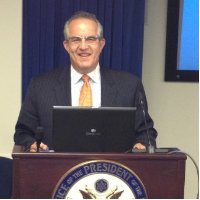 Richard Miller is a Senior Advisor at Econsult Solutions, Inc., He is the Principal at RAMAir Consulting and he serves as the Vice President of Marketing and Communications for Innovation America. He brings to ESI over 30 years of experience building and executing strategic marketing and operations plans for commercial airlines and technology-based economic development organizations.

Richard has joined Tesla as an Energy Advisor. His new role with Tesla is working with clients who want to convert their typical grid energy system to new solar energy for their homes and businesses. Mr. Miller will be engaged in the marketing of Tesla’s portfolio of all electric vehicles.

Currently Richard serves as the Vice President for Marketing and Communications with Innovation America and provides strategic marketing and consulting services to “Innovation Intermediary” clients. He also is the principal of his own consulting practice specializing in technology-based economic development organizations and membership associations.  Previously he was the Vice President of Marketing and Communications with the Iowa Innovation Corporation and Senior Vice President with the National Association of Seed and Venture Funds (NASVF).  At NASVF Richard was instrumental in securing a contracts with the USDA Agriculture Research Service and was awarded a $200,000/year multi-year contract with the U.S. Army’s Telemedicine & Advanced Technology Research Center (TATRC) at Ft. Detrick, Maryland to accelerate the commercialization of government technologies with emerging private technology companies.

Richard’s career as an airline executive with US Airways included management positions in Connecticut, Michigan, Colorado, Washington, D.C., Virginia and Pennsylvania.  He spearheaded the expansion of the airline’s international markets from the Philadelphia hub.

Richard is a successful grant writer having been awarded regional, state and federal grants to contribute to the growth of several technology-based economic development organizations throughout the US.  He is the publisher of marketing research reports, economic impact studies weekly e-newsletters and publications featuring innovation-based strategies.   As a frequent keynote speaker at innovation-based conferences, Richard has been featured presenter and panelist at national and international conferences including the International Economic Development Council, the Small Business Innovation Research Annual conference, National Council of Entrepreneurial Tech Transfer, the Federal Laboratory Consortium, Association of University Technology Managers, COTEC (Spain and Portugal), American Councils for International Education (Russia) and Commerce Development Research Institute (Taipei).

Richard is a licensed pilot, motorcyclist and gourmet chef.  He is a Certified Travel Counselor and majored in marketing and communications at Robert Morris College.