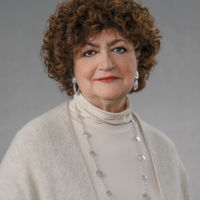 RoseAnn B. Rosenthal, recent President, CEO and member of the Board of Directors of Ben Franklin Technology Partners of Southeastern Pennsylvania (Ben Franklin) since 1996, has over fifty years of experience in business investment, regional planning, and economic development. During her 25-year tenure, Ben Franklin introduced innovations that evolved the statewide Ben Franklin network into one of the most active seed and early-stage investment operations in the nation, supporting the formation of thousands of regional enterprises.  Rosenthal currently serves BFTP/SEP as Director Emeritus and Senior Advisor and is a member of its Global Philadelphia Venture Fund Investment Committee.

Rosenthal garnered 18 years of her economic development experience at the Philadelphia Industrial Development Corporation (PIDC). As Senior Vice President for Strategic Development, she launched regional initiatives including the PIDC Penn Venture Fund, the Southeast Pennsylvania Export Consortium, now the World Trade Center of Greater Philadelphia, and was a founder and leader of Strategy 21 that coalesced regional economic development organizations around a framework for growth. As a member of the City’s Defense Adjustment Team, she structured the $50-million Defense Conversion Fund.

Rosenthal has served on Mayoral and Gubernatorial transition committees of both parties, has been a member of economic development task forces under four presidents and, in 2010 was named as an inaugural member of the Obama Administration’s National Advisory Council on Innovation & Entrepreneurship in 2009. The Council advised the US Department of Commerce Secretary and the Administration on key issues relating to innovation and entrepreneurship that informed the 2012 American Jobs Act.

Rosenthal has been active on public and non-profit boards, and on economic development, venture, and university advisory committees.  She has served on the Economic Advisory Council of the Philadelphia Federal Reserve and the CEO Council for Growth, serving on its Recharge and Recovery Taskforce, and currently is on the board of the World Trade Center of Greater Philadelphia, a founder and board member of IMPACT PHL, and elected Director Emeritus of the Philadelphia Alliance for Capital and Technology.  Rosenthal is an advisor to Plain Sight, an emerging impact investment fund; the Delaware Innovation Space; and an emerging women enterprise fund.   She is a founder of and chairs the Broad Street Angels, a 100+ angel investment group, which she co-founded, based in the Philadelphia Union League.

Rosenthal has been active in support of women leadership. She is a member of Women Corporate Directors, the Pennsylvania Women’s Forum, and the Forum of Executive Women, which acknowledged her 31 years of on-going commitment to the organization in 2011. She was also one of the 1997 Business Philadelphia’s Women to Watch; and she was an early supporter of predecessor organization to the Alliance of Women Entrepreneurs, serving on its Advisory Board, leading the development of reports on high-growth women entrepreneurs, and housing the organization in its start- up years at Ben Franklin/SEP. In 2013, AWE recognized Rosenthal with its Iris Newman Award. In 2012 she was inducted into Temple University’s Entrepreneurial Hall of Fame.

Rosenthal has been widely recognized for her leadership by national, state and local organizations, including the National Science Foundation for her work on the federal SBIR and STTR programs, Temple University’s Champion of Research Award in 2018,  the International Economic Development Organization, the Philadelphia Alliance of Capital and Technology Legend Award for Lifetime Achievement, the National Venture Capital Association’s American Spirit Award, and the Pennsylvania Society‘s coveted Distinguished Citizen of the Commonwealth award.