ESI was commissioned by the Capital Trails Coalition to evaluate the impacts of the Capital Trails Network across the Washington, DC metropolitan region, which was defined as the District of Columbia; City of Alexandria, Arlington County, and Fairfax County in Virginia; and Prince George’s County and Montgomery County in Maryland. ESI conducted further analysis on the impacts of the trail network at the state and county/city level. ESI examined the current, existing network as well as the entire network upon completion of proposed trails. ESI quantified these impacts and described the economic and societal value to the Washington, DC metropolitan region. 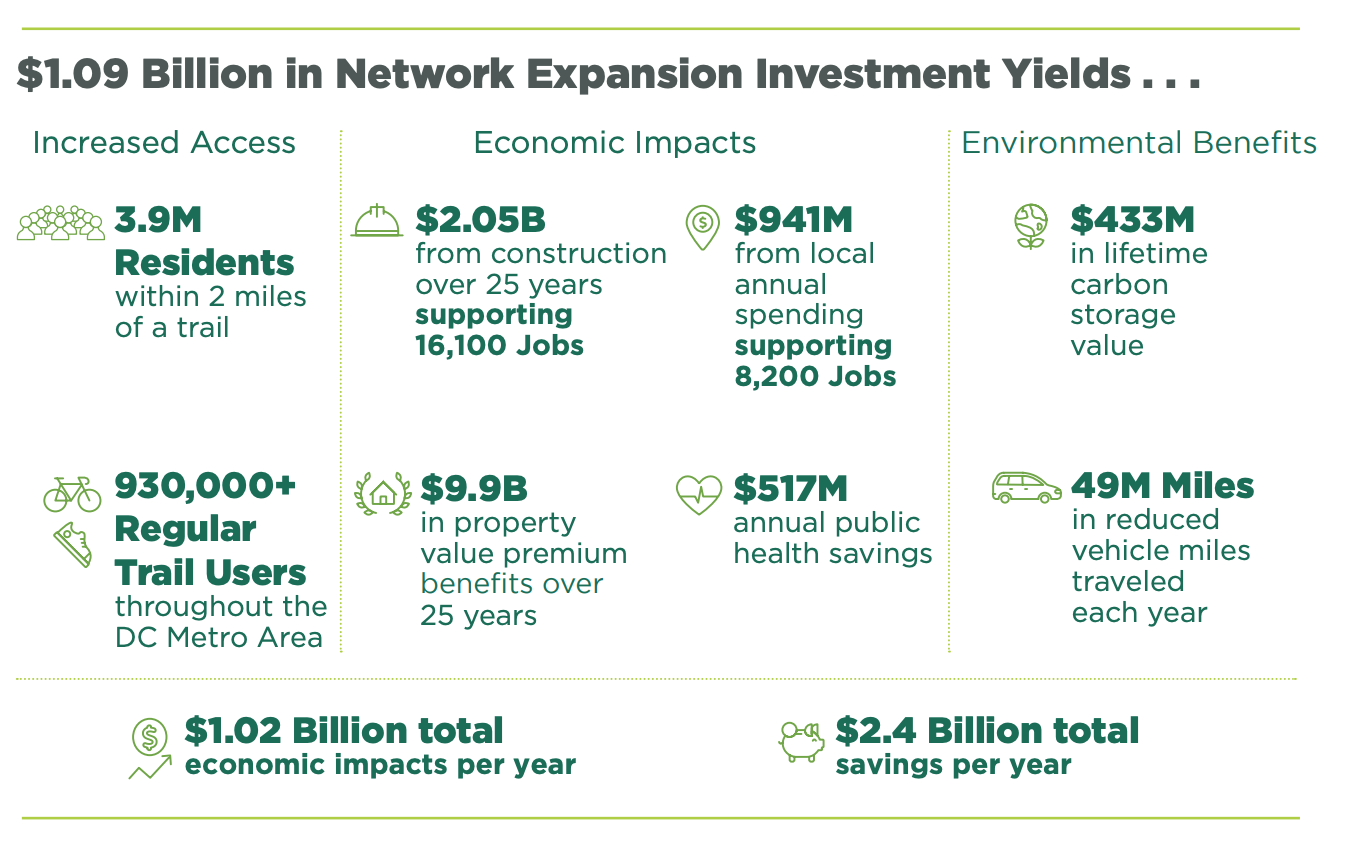 ESI was hired to express the impact of the seven member institutions of the New Jersey Association of State Colleges and Universities (NJASCU) on the New Jersey state economy. Together, these member institutions are responsible for a significant amount of economic output, supporting thousands of jobs in the state and generating millions of dollars each year in state tax revenues. They also collectively fulfill a critical role in making the state economy more competitive, enhancing the vibrancy of local communities throughout the state, and creating pathways to middle-class jobs for state residents. They therefore produce a compelling return on investment of state dollars and are an important part of the state’s future vitality.

Member institutions are among the largest employers, procurers of goods and services, and initiators of capital projects within their respective communities, all of which directly and indirectly supports households and businesses throughout those regions. Member institutions also attract spending into the state or retain it in the state, in the form of students’ living costs and the spending power of a wide range of visitors to campus (e.g., prospective students, visitors of students, event attendees). Lastly, member institutions’ educating and credentialing function translates into higher earning potential among alumni, which for those graduates who live and work in the state, means more household income spent back into the state economy. In all of these cases, member institutions are enriching the state economy, supporting employment within the state, and growing the state’s tax base.

ESI’s analysis shows NJASCU member institutions, in aggregate, result in a total economic impact of $6.1 billion, contributing $2 billion in employee compensation, $219 million in state tax revenues, and supporting approximately 36,000 jobs. In addition, all NJASCU member institutions have a high positive return on investment—about a million dollars per graduate over the course of their entire career. This is simultaneously more money in the pockets of alumni and more value contributed to the state economy. What’s more, NJASCU institutions multiply the effect of state dollars; every $1 million invested in member institutions generates $16 million in state economic activity.

The COVID-19 pandemic created a range of health, economic, and social policy challenges for New Hampshire. Changes in economic conditions have deepened existing challenges for vulnerable populations and communities, while other households have faced new challenges around decisions regarding employment and child care that they had never anticipated. As New Hampshire seeks to accelerate its economic recovery, this study focuses on key factors that impact the decision-making of households and may serve as constraints to returning to the workforce or expanding their participation.

This study began in December 2019 pursuant to a legislative requirement to understand the economic implications of benefit cliffs. These “cliffs” result from situations in which increases in earned income lead to decreases in net resources for households due to a loss of program benefits, disincentivizing workforce participation. These cliffs can lead to either short-term losses for these households or long- term losses if households opt for (rational) short-term choices to forgo potential wage increases that lower their long-term earnings trajectory and economic mobility, which thereby also limits economic growth, particularly important in a state like New Hampshire with an aging workforce and historically low (at the time) unemployment levels.

Pandemic accelerates rise of Cities 4.0, propelling the development of a future roadmap toward urban prosperity, sustainability, and citizen well-being

March 30, 2021 (Philadelphia, PA) – Today, ESI ThoughtLab released Smart City Solutions for a Riskier World, a forward-looking study that provides city decision-makers with an evidence-based playbook for driving better social, environmental, and economic outcomes in today’s transformed world. The research, based on a survey of 167 city leaders from 82 countries around the world, dramatically underscores the vital role of technology, data, partnerships, and citizen engagement in enabling municipalities to recover from the COVID-19 pandemic and helping give rise to a new class of cities—Cities 4.0.

To understand how cities are using the UN Sustainable Development Goals (SDGs) as a roadmap for the future, ESI ThoughtLab collaborated with a global coalition of government, business, and academic leaders to conduct a comprehensive benchmarking study of diverse cities across six world regions: Africa, Asia Pacific, Europe, Latin America, Middle East, and North America. The research also included AI-enabled sentiment analysis of citizen views on the SDGs and digital solutions.

“Our discussions with global city leaders have made it clear that the pandemic has been a catalyst for remarkable technological, business, and social change, which will continue even after the health crisis ends,” said Lou Celi, CEO of ESI ThoughtLab. “The most successful cities will be digitally transformed, citizen-centric, and fully sustainable, as well as skilled in the new ways of doing business. We call these cities, Cities 4.0.”

Rise of Cities 4.0 and Technology Investments Set to Fuel Change

ESI ThoughtLab researchers found that 20 of the 167 cities surveyed meet the definition of Cities 4.0—cities that excel at leveraging technology, data, ecosystems, and partnerships of all kinds, including those with businesses, universities, citizens, and communities. As a result, Cities 4.0 are further ahead in smart city initiatives than other cities. For example, they widely deploy 14 smart city projects versus an average of seven for other cities and they have superior infrastructure, better public transportation, roads, parks, healthcare, and digital connectivity.

In addition, Cities 4.0 have made the greatest headway on the SDGs, with 86 percent making progress across all 17 goals. And they are seeing higher ROI on technology investments made in all urban domains, including digital infrastructure; mobility and transportation; public safety; living and health; government and education; sustainability; and energy and water.

SDGs are a Priority Moving Forward

City leaders are applying lessons learned during the pandemic to set a path to achieve the SDGs. They reported that they were doing the most with SDGs related to people, including no poverty (91% of cities), good health and well-being (89%), decent work (86%), and quality education (86%).

The survey respondents also identified hurdles to advancing on the SDGs over the next three years, including complex policies and regulations (52% of cities), finding the right partner or supplier (50%), and managing data security and privacy (44%).

Moving forward, city leaders can utilize the ESI ThoughtLab research as a roadmap to becoming Cities 4.0. They can also take the four steps that Cities 4.0 follow to advance their SDG agenda: (1) regularly monitor and assess SDG efforts, (2) ensure SDG programs are widely supported throughout government, (3) designate a department to take the SDG lead, and (4) undertake a voluntary local review of progress on the SDGs.

About Smart City Solutions for a Riskier World

ESI ThoughtLab’s research for the Smart Cities for a Riskier World program was based on rigorous analysis, including in-depth phone surveys of 167 smart city leaders around the world conducted during the fourth quarter of 2020. The full list of cities, which includes Abu Dhabi, Amsterdam, Atlanta, Bangkok, Beijing, Cairo, Rio de Janeiro, Washington, DC, Libreville, among others, can be found by visiting www.citysolutions.riskierworld.com

Urban experts and economists at ESI ThoughtLab benchmarked the cities on the use of smart technologies, data analytics, partnerships, and other levers of change across their urban ecosystems to develop this ground-breaking data and analysis. ESI ThoughtLab also correlated and integrated data on city services, demographics, and quality of life from the World Bank, Numbeo, IESE, and other well-respected sources. To gain a citizen perspective, ESI ThoughtLab is also conducting ongoing AI-enabled sentiment analysis of residents of 10 representative cities around the world, which is publicly available on www.citysolutions.riskierworld.com

All data and results from the study were reviewed by an independent advisory board of city leaders, corporate executives, and academic experts, including representatives from sponsoring companies Axis Communications, Bentley Systems, Cisco, Deloitte, Hatch, Honeywell, Intel, The International Finance Corporation, Microsoft, NTT, and Oracle.

ESI ThoughtLab is an innovative research firm providing fresh ideas and actionable insights through rigorous data analysis. The team of 30 economists and subject matter experts specialize in assessing the impact of technological, economic, and demographic shifts on companies, industries, and cities. Learn more at www.esithoughtlab.com.

Succeeding in a Transformed Post-Pandemic World

With the end of the pandemic in sight, a new U.S. administration in place, and Brexit a reality, 2021 is quickly becoming a new dawn for business and government. Digital, social, and economic shifts will continue to gain momentum, propelling companies and cities into the Fourth Industrial Revolution. This is a defining moment for business leaders and policymakers. Like other seminal turning points in history, it is galvanizing technological, market, and social forces already in an unprecedented manner.

As this new era continues to unfold, private- and public-sector leaders will require visionary thinking and actionable insights to keep their organizations profitable and their cities safe. To fill this need, ESI ThoughtLab is conducting several thought leadership research programs throughout 2021 to analyze how industries and cities will need to adapt their approaches and digital strategies to succeed. Are you and your clients prepared for 10 ways that business will forever change?

The 2021 thought leadership agenda has been set. The pandemic has shown that we live in an increasingly interconnected world where disruption can occur suddenly and cascade unexpectedly. Agility and resilience must continue to be a driving force for business and government to succeed. Massive transformative shifts lie ahead, and to help our clients and governments around the world, we will be building off of these themes and conducting several cutting-edge evidence-based research initiatives throughout the year.

We’re calling this moment ‘The Big Shift’, and we would love to hear your thoughts on these topics.  In our opinion, successful thought leadership is a team sport, requiring collaboration and the right blend of analytical, editorial, and marketing skills. Please contact us today if you would like to learn how you can join one of our many exciting programs.

Lou Celi is Founder and CEO of ESI ThoughtLab. During his more than 35 years of research, marketing and publishing work, Mr. Celi has helped top organizations build their businesses by engaging corporate and government decision makers. Prior to setting up ESI ThoughtLab, Lou was board director and president of Oxford Economics, where he built the firm’s successful business in the Americas and set up its global thought leadership practice.