As a former manufacturing city, Philadelphia has been well-known as a national center of craft and making for over three hundred years. Traditional craft refers to the small-scale production of useable goods, often created by hand with natural materials such as clay, wood, fiber, metal, and glass. Craft can be differentiated from fine art in that the objects are not only decorative, but also generally have utilitarian functions. Craft making in Philadelphia has been an important part of the city’s economy and cultural identity throughout its history. From 18th century furniture-making to modern studio practices and the “Maker Movement,” the local production of artisanal goods has historically had a sizable impact on the economy.

CraftNOW engaged Econsult Solutions in 2019 to undertake a preliminary economic and social analysis of the sector. The purpose of this analysis is to define and describe the craft and maker sector in Philadelphia in 2019, and estimate the economic impact of the correlating business activity as well as the tourism that it attracts into the city and region. In addition, the report summarizes the range of social benefits that accompany craft and making at an individual and community level. The report concludes by compiling best practices from around the country on how to support the artisanal economy and promote artisanal tourism. 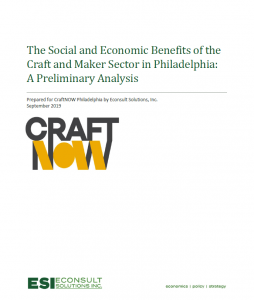