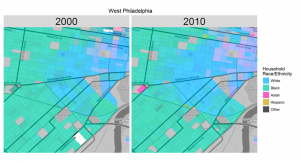 Growing up White in West Philly, I thought a lot about neighborhood boundaries. Somehow, despite “West Philadelphia” being predominantly Black, my block at 47th Street was entirely White. To the east, towards Penn and Drexel and Center City, lay more blocks like my own, filled with predominantly White households. Immediately past 49th Street to the […]