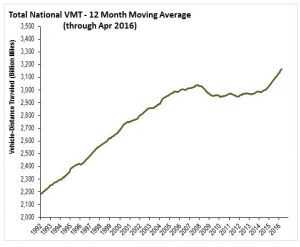 July 29, 2016 / Comments Off on Generational Change in Car Usage

In September 2015, the Washington Post wrote the obituary for “America’s fading car culture” entitled “Cruising toward Oblivion,” [i] echoing a June 2013 New York Times piece entitled “The End of Car Culture” which declared that, “America’s love affair with its vehicles seems to be cooling.” So imagine my surprise when I recently scrolled over […]