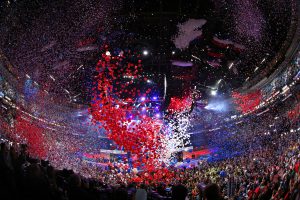 How Much Do National Political Conventions Mean Economically?

August 5, 2016 / Comments Off on How Much Do National Political Conventions Mean Economically?

The massive political tides have come and gone. Although the RNC and DNC are now officially over, the conversations around each event have not faded, and many are still weighing in on the relative successes of each convention, as well as the impact they have made in their host cities. “Convention tourism” is a big […]