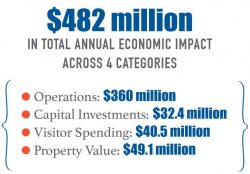 “Our analysis demonstrates that these anchor institutions are not only major economic generators, but also enhance the quality of life for Chestnut Hill residents in a number of ways,” stated Ethan Conner-Ross, Director at ESI. “Each of the member institutions contributes to the economy and the community in ways that are tailored to its mission and resources, and the result is a collective impact greater than the sum of its parts.” Of the nearly half-billion in overall impact, $360 million is generated from operational impacts, $32 million is from capital investments, $41 million in impact is from student and visitor spending, and an additional $49 million in increased property values. In fact, homes within just a half-mile on one or more of the organizations involved in CHIL saw a 2.5% increase in property value, and homes in Chestnut Hill sell for, on average, 136% more than standard homes located elsewhere in the city. In addition, the analysis found that the Chestnut Hill region supports 3,480 jobs with $182.1 million in total earnings, brings 317,000+ unique visitors to the region who annually spend $27 million, provide $24 million in student financial aid, and $19 million in charitable healthcare offerings. Read the article in the Philadelphia Business Journal: “What Chestnut Hill’s $482M impact means for business recruitment, home values” Read the report on our site: https://econsultsolutions.com/report/the-economic-impact-of-chestnut-hill-institutions/