The Effect of Handing out Candidate Listings at Polling Places

In this Present Value post, ESI analyzes the effect of handing out listings of candidate recommendations outside of polling places, using work from May’s Philadelphia Municipal Primary done in conjunction with the Philadelphia Bar Association.

The full working paper can be downloaded here.

Leading up to Philadelphia’s Municipal Primary in May, we talked a lot about the election for Court of Common Pleas, a low attention race for ten-year judgeships with broad jurisdiction over Civil and Criminal trials, Family Court, and Orphans’ Court. We found that being in the first column of the ballot had the biggest effect on winning, bigger than being recommended by the Democratic Party, The Philadelphia Inquirer, or the Philadelphia Bar Association.

Before the election, ESI was approached by the Philadelphia Bar Association to measure the effect of an outreach strategy that they were considering: having volunteers hand out listings of their recommendations outside of polling places.

The Bar’s Commission on Judicial Selection and Retention releases official recommendations for all judicial elections. To develop its recommendations, the Commission surveys and interviews all judicial candidates. In addition, the Commission’s Investigative Division conducts a thorough investigation of each candidate who applies to be rated for a recommendation, including calling references and other individuals with experience working with candidates and reviewing publicly available information and writing samples. Candidates are then rated “Recommended” or “Not Recommended” by vote of the Judicial Commission, based on a set of specifically enumerated, publicly available standards. These standards include demonstrated legal ability, experience, and ethical track record. In addition, candidates who do not apply to be rated are automatically rated as Not Recommended.  The Commission’s recommendations are broadly considered an apolitical measure of candidate quality; in 2013, The Philadelphia Inquirer stopped endorsing candidates on its own and began simply citing the Commission’s recommendations.

Handing out literature at polling places has a long history in Philadelphia politics. The City Democratic Party makes endorsements, but then local Democratic Ward leaders make their own endorsements, often bucking the City Party’s recommendations. One of their main avenues for their influence is having (potentially-paid) people stand outside of polling places with flyers listing a recommended candidate. State law allows such electioneering so long as it takes place more than ten feet from a polling place’s entrance. Our analysis here, though different because the flyers represented an independent non-partisan organization and those handing out listings were volunteers, may shed light on the value of those Ward flyers, as well.

There are two reasons we might expect handing out flyers to be particularly effective for the Common Pleas race. First, listings are given directly to voters as they are about to vote, so there isn’t any wasted effort on non-voters, and there is much less chance that voters will forget the information by the time they are in the booth. In an election where voters can select up to nine candidates, the cognitive load matters. Second, the Common Pleas race is a low-attention race, so voters are less likely to have strong opinions about candidates, and may be more open to information from third parties.

Why randomize? Randomization allows us to be sure that we are measuring the effect of the volunteers, rather than another feature of the neighborhoods. For example, suppose we didn’t randomize, but allowed volunteers to choose their own place to hand out literature. In this case, volunteers would likely go to polling places close to their homes. This would introduce two problems. First, we wouldn’t be able to distinguish between the effect of handing out papers and the fact that maybe the volunteers lived in systematically different neighborhoods from the rest of the city. If we measured that Recommended candidates did better in volunteer divisions than in others, would that be because of the listings, or because volunteers typically live in divisions where candidates were more likely to do well? We could control for observable confounders, such as income, race, and previous election results, but we would never be able to be sure that there wasn’t something about the divisions that made them more likely to vote for Recommended candidates, besides the listings.

Second, we would likely get a non-representative sample of the city. We want to be able to look at different parts of the city, and to know that the results are representative of the entire electorate. 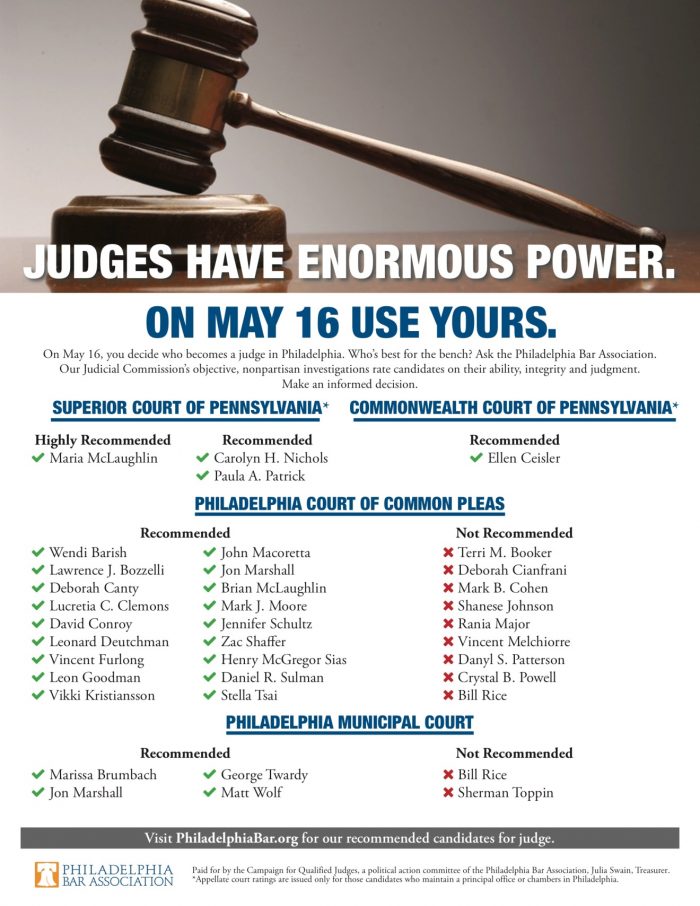 The Results: Handing Out Listings Works

Grey = Recommended by the Bar Association. S.E. are bootstrapped standard errors of the percent of vote. Prob(Win) is the bootstrapped probability of being ranked among the top 9 vote-getters.

Those city-wide results hide interesting differences among types of neighborhoods.  We have divided polling places into four groups based on data from the American Community Survey: High Income (household median income > $50K), Moderate Income White, Moderate Income Black, and Moderate Income Hispanic, based on the race/ethnicity with the highest representation. 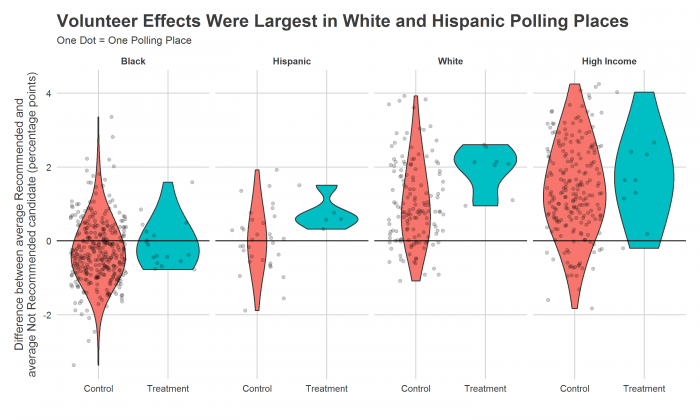 We don’t know why predominately-Black polling places might have had smaller effects than White and Hispanic ones. Maybe those neighborhoods already had other people from other organizations handing out sample ballots, mitigating the effect. Maybe voters there were less likely to assent to recommendations of Bar Association volunteers. Maybe volunteers there were less active, and less likely to engage voters walking through the door. We don’t know, though future research could test volunteer training to attempt to isolate the effect, and perform better in those divisions.

One way to assess the practical significance of this effect is to see if it is large enough to have made real world changes. Volunteers had an effect as high as 0.71 percentage points in moderate income White wards, and the last Not Recommended candidate won the overall election by only 0.27 percentage points. There are only so many of those divisions, however, and soon you get to divisions with lower effects. Suppose the Philadelphia Bar had already known the above results, and placed their volunteers in the optimal polling places. How many volunteers would it have taken to change the election outcomes? 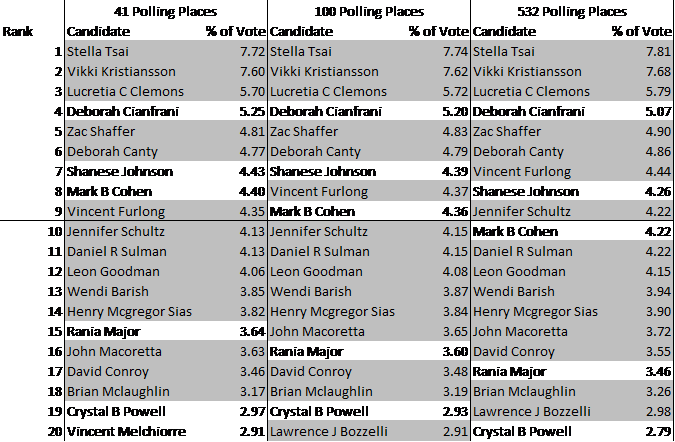 However, there is cause for hope. This was the first time the Bar Association undertook a polling place effort, and recruiting volunteers next time could be easier. With one attempt under their belt, refining volunteer training and trying other formats of listings could lead to higher treatment effects, and better results. And listings of recommendations don’t need to do all of the work alone. As part of a multi-pronged strategy, listings could be enough to push Recommended candidates over the top.

was a Director at Econsult Solutions, Inc (ESI). Jonathan’s dissertation research used GIS and large-scale computational techniques to develop a Bayesian method to measure the movement of neighborhood boundaries.