The Potential Economic Impacts of the Mariner East Pipelines

Due to the significant expansion of construction and operations associated with the Mariner East pipelines, MHIC, and the Revolution Project at the MHIC, ESI was commissioned by Sunoco Pipeline, L.P. and its parent company, Energy Transfer Partners, L.P. to update the economic impact study to reflect the changes in project scope.

Key findings of the new report include:

In addition, the report provides insights into the evolving energy landscape in Pennsylvania and the rise of natural gas liquids (NGLs) such as butane, ethane, and propane, whose production has increased and is forecasted to continue to increase in the U.S. It projects that the expansion of the Mariner East pipelines and the introduction of the Revolution Project will boost the transportation, storage, and distribution capacity of NGLs in southeastern Pennsylvania, creating a supply for home and commercial heating as well as manufacturing and industrial feedstocks. 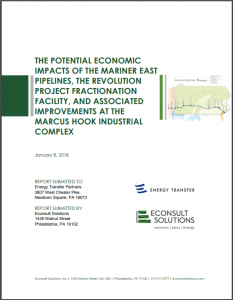