Econsult Solutions, Inc. (ESI), along with American Communities Trust and Urbane Development conducted a survey assessing the landscape of U.S. kitchen incubators/accelerators.  The study was a follow up to ESI’s initiative, US Kitchen Incubators: An Industry Snapshot, the first of its kind.

The report involved the following metrics to measure the endeavor’s growth:

ESI’s research found that there has been a surge in the kitchen incubators landscape. The findings indicate that between August 2013 and March 2016, the number of kitchen incubators increased by more than 50% to over 200 facilities.  Kitchen incubators operate in 39 states across the country and tend to be frequently located in urban areas. More than half of the incubators surveyed are for-profit (61%), 20% are USDA-certified and 40% have partnerships with outside organizations. On average, women make up 53% of tenants, down slightly from 61% in 2013. Minorities average 28% of tenants across respondents, down slightly from 32% in 2013.

Most incubators are very lean operations with few employees and modest operating budgets. Although their financial status seems to be strengthening, kitchen incubators continue to be risky endeavors with complex operations and low margins. The success of kitchen incubators continues to rely on operators going beyond just providing shared space and offering a more diverse set of resources for culinary entrepreneurs. Many respondents report that cleaning, maintaining the facility, and finding new customers are the greatest challenges

While still a relatively new phenomenon, kitchen incubators are likely to continue the upward trend and will play an important role in the growth of the economy, creating jobs, fostering business innovation and facilitating development. 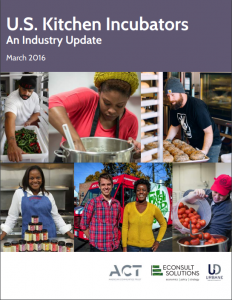