In more than a dozen states across the country, state legislatures have either passed or have pending bills based on a piece of model legislation developed by the American Legislative Exchange Council known as the “Energy Discrimination Elimination Act.” These bills would essentially pull state funds from investment managers if they are deemed by government officials to be adverse to the oil and gas and coal industries in their investment strategies. Some of the same states – in addition to many others – are considering bills that would similarly punish or blacklist financial firms for including having strong Environmental, Social, and Governance (ESG) standards in their investment strategies.

The legislation has been accompanied by actions at other levels of government, including state executive actions by treasurers and governors, legal action by state attorneys general, and even the threat of federal action in the next Congress. At the tip of the spear of the state efforts to pressure financial institutions away from assessing and acting upon the financial risks of such issues as climate change, gun violence, and workers’ rights is the threat of pulling state funds from their asset managers.

Among many key unknowns associated with these legislative and executive actions are impacts to the residents and taxpayers of the states where they become law. Setting aside the implications of politics interfering in financial decisions, there is the question of how removing major, proven financial companies from the marketplace will affect competition. Restrictions on financial market participants, (and in this analysis we look at large investment banks), alter the outcomes of municipal bond market transactions and modify contractual engagements with state governments. It is therefore of tremendous importance that policymakers, business leaders, and the public have the tools to estimate and anticipate these impacts. 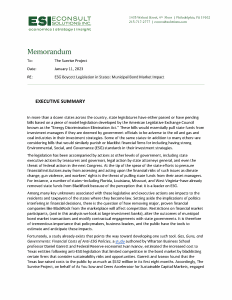 The Current State of EV Policy in the United States

ESI Center for the Future of Cities Research Agenda
Share This