Will Automation Lead to Mass Unemployment?

Recent advancements in robotics and artificial intelligence have some experts worrying about the coming obsolescence of the human worker. Some are even calling for a universal basic income provided by the government for everyone, under the assumption that work will become scarce. But economists seem to have a pretty different view from the futurist and Silicon Valley types.

One of the reasons that economists are skeptical is because much of the fear that has recently been stoked in the media is familiar. Every few decades, predictions about the “end of work” have pervaded public discourse, and they’ve always been wrong. There was a spike of automation anxiety in the late 1920s and ‘30s, when machines were starting to take over jobs on farms and in factories. Automation anxiety surged again in the late ‘50s and ‘60s, when President Kennedy ranked automation as the major domestic challenge of the time.

We find ourselves in another era of automation anxiety right now. Is there still reason to be skeptical or is this time any different?

US Employment to Population Radio | 25 to 54 Years

The above chart shows the percentage of prime-age people with jobs in the US. Ever since women joined the workforce in big numbers, the share of those working has stayed around 80% (outside of recessions). During this period in the US, technology displaced millions of farmers, telephone operators, and factory and railroad workers. We have also since lost pinsetters and elevator operators. But despite the number of jobs lost, work persists.

It’s worth noting that technology and automation have consistently transformed the way work gets done. Robots and automation have allowed us to increase efficiency by making more things for less. But are machines replacing human labor at a faster pace than the economy can absorb? Current evidence indicates that while in the short term technology often does displace jobs, it also creates many new jobs long-term.

New technology can create jobs in a few ways. There are the direct jobs for people who design and maintain the technology, and sometimes whole new industries built on the technology. But the part that is often overlooked is the indirect effect of labor saving inventions. When companies can do more with less, they can expand (i.e., add new products or open new locations) and lower prices to compete. And when goods and services are cheaper, consumers can afford to buy more of their product, or use their savings to spend on other things (like sporting events, dining, etc.).

ATMs are an example of this in practice. When ATM machines were introduced in the 1980s, it was thought that bank tellers would quickly stop existing. Over time, each bank branch did end up employing fewer tellers. However, ATMs made it cheaper to operate bank branches, which caused more bank branches to open. This unexpectedly lead to more bank teller jobs overall. Similarly, when spreadsheet software was introduced, it displaced two million bookkeepers. However, it also created millions of new jobs in the form of accountants, auditors and financial analysts.

Warnings about the “end of work” tend to focus on the disruptiveness of the new technology itself and not the new productivity brought on by it. The widely known Oxford study from 2013, for instance, is often quoted stating that nearly half of all jobs are vulnerable to automation. But even that study assesses only the capabilities of automation technology; it does not attempt to estimate the actual extent or pace of automation or the overall effect on employment. In other words, it only looks at the kinds of tasks ripe for automation, not the actual jobs (which contain a variety of different kinds of tasks, many of which are still hard to automate) themselves.

The key argument here is that automation displaces workers who are doing highly automatable work and tasks, but it does not affect the total number of jobs in the economy because of offsetting effects. This process is how our standard of living has improved over time, and it has always required workers. It is important to keep in mind that even though technology can be a net job creator, it does not mean that the new jobs created will show up right away, be located in the same place or even pay the same as the ones that were lost. All it means is that the overall need for human work has not gone away.

US Unemployment Rate | 16 Years and Over

As noted above, economists tend to be skeptical of fears related to technological unemployment, pointing to data that suggests this particular scenario is nowhere in sight. While technologists and futurists acknowledge the validity of these conclusions, they do question whether historical trends are a good guide of what’s to come. After all, the rate of technological change and its effect on the economy has been grossly underestimated before.

In the mid-2000s, two economists assessed the future of automation and concluded that tasks like driving in traffic would be “enormously difficult” to teach to a computer. Around the same time, a review of fifty years of research concluded that human level speech recognition “has proved to be an elusive goal”. Today, we know these predictions were wrong given recent advances in artificial intelligence. Since the start of the 2010s, artificial intelligence has beaten professional gamers, sparked a new age of digital innovation, and is now powering the self-driving car movement. And its footprint can be felt in a number of industries, including the Internet of Things (IoT), transportation, logistics, health, and fintech.

This technology is behind much of the automation happening today, and it has the potential to be a key disruptive force in the near future. This is because, unlike the automation that occurred during the Industrial Revolution (which complemented or replaced physical work), modern automation is substituting cognitive work. While advances in artificial intelligence are certainly happening, the real modern advances aren’t in jobs involving manual labor. Rather, it is in jobs like accounting, bookkeeping, and other related roles. With machines increasingly mirroring human cognition, some argue that this will have many (potentially negative) consequences for our service and knowledge based economy.

The above chart is the textbook illustration of advancement in computer hardware. It shows the number of transistors that engineers have squeezed onto a computer chip over time. On its own it already looks pretty impressive, but note that it isn’t a typical scale; the numbers shown increase exponentially. On a linear scale, it would look more like this:

It is hard to imagine this trend not being massively disruptive. And as hardware complexity increases, computers will be able take on increasingly more difficult tasks. Yet despite all of this innovation, the data on productivity fail to show that automation is having an unusual effect on the labor market.

The above chart shows labor productivity, which is a measure of the goods and services we produce divided by the hours that we work. Over time it goes up – meaning that we become more efficient by doing more with less labor. With increases in labor-saving innovation, we would expect the line to get steeper. However, when we look at productivity growth, we can see that it has been slowing down since the early 2000s, and not just for the United States:

The rise of modern robots is the latest chapter in a story of technology replacing people. Much like before, recent advances in artificial intelligence are causing some to forecast a future where humans can’t find work. But current data fail to support this conclusion. Economic history shows that automation not only substitutes for human labor, it complements it (the loss of some jobs and industries gives rise to others). The narrative that automation creates joblessness is inconsistent with the fact that we had substantial and ongoing automation for many decades but did not have continuously rising unemployment. There is also no empirical support for the notion that automation is accelerating exponentially and leading to a jobless future. While breakthroughs could come at any time, there still is reason to be skeptical that it will cause mass unemployment.

Modern technology’s effect and influence on our lives is undeniable, but it’s possible that it is radically changing our lives without fundamentally changing the economy.

To benchmark the emergence of new jobs, Cognizant Center for the Future of Work together with ESI ThoughtLab created the Jobs of the Future Index. This quarterly index measures the changes in demand for a set of 50 jobs of the future: 45 actual and 5 proxy jobs. It also includes eight additional sub-indices that represent families of similar jobs. The CJoF Index score represents the sum of the current quarterly total of U.S. job openings divided by the quarterly total of U.S. job openings in the 3rd quarter of 2016 (the base year for the Index). Click here for more information. 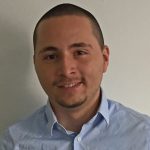 Carlos Bonilla is an analyst at Econsult Solutions, Inc. with a focus in economic and environmental issues in urban areas. At ESI, Carlos applies a strong background in spatial analysis, cartography, and data visualization. Prior to joining the team, Carlos worked as a fellow for Azavea’s Summer of Maps, a program that pairs students with local and national non-profits to perform geospatial analysis.