In 2013, Bensalem Township in Bucks County, Pa. decided to explore implementing a one-percent earned income tax (EIT) for resident and nonresident workers in the municipality. At the time, Bristol Township was the only other municipality in Bucks County to implement an EIT. Bensalem contracted Econsult Solutions, Inc. (ESI) to conduct an analysis of the effects a one-percent EIT would have.

To estimate the potential collections generated by an EIT, ESI employed several methods to find a defensible range for the EIT collections that would be generated by resident and nonresident workers.

Furthermore, ESI found that imposing an EIT in Bensalem would have both positive and negative impacts on the township’s economic competitiveness, but, on the balance, the positives would outweigh the negatives. 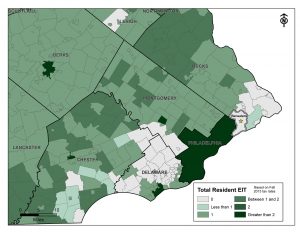