Econsult Solutions, Inc. (ESI) and CEO Council for Growth, an initiative of the Greater Philadelphia Chamber of Commerce, have teamed up to release the Technology Transfer and Commercialization study, which examines the Philadelphia region’s economic growth into the future.

The study sought to lay a road map on how the Philadelphia region can further capitalize on its culture of innovation and entrepreneurship while measuring how the region stacks up with other leading regions around the country.

The study also set an “overachieving” goal for the region’s research institutions to create 10 companies that will grow to a liquidity event of $100 million or more over the course of next 10 years.

Results found that the Philadelphia region scored well in research categories due in part to its dense array of institutions of all sizes and disciplines. Conversely, the study also found that the region lacks in activity when compared to other leading regions. In fact, the highest ranked regions were found to boast two or more times activity than Greater Philadelphia. The region’s dense array of institutions has not translated to equitable amounts of commercialization when compared to other leading regions.

In order to grow the region’s commercialization output, the study recommends the following steps: 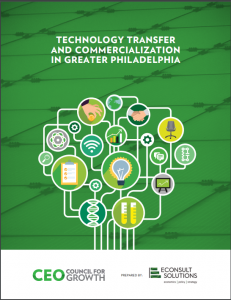 City Scenarios for a Post-COVID Future

After US and China Alaska Meeting: A 2021 Outlook for US-China Relations