ESI found that ferry service increased the value of homes that were within a band extending to 1/8 mile away by 8.0%, and 2.5% for all homes within a 1/8 of a mile to 1/4 mile band away. In addition, new residential developments within 1/4 mile to service, increased by nearly 350 additional residential units and 487,238 residential square feet. In several cases, the total user benefits were greater than total operating costs, meaning that the subsidy was basically less than the total net benefit for users after paying the fare. The report found agglomeration effects for worker accessibility with greater service, as well an easing impact on the transit network, as ameliorating overcrowding on New York’s typical public transit system. Finally, as tragically shown by September, 11 and Hurricane Sandy, the ferry service can be established relatively easily and quickly to respond to transit service disruptions. 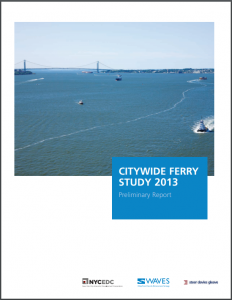