Econsult Solutions, Inc. (ESI) teamed up with Urbane Development, LLC, and the Detroit Food and Fitness Collaborative (DFFC) to conduct and release an economic analysis of the City of Detroit’s food system.

Through various research tactics, the study sought to assess the current state of Detroit’s food economy, highlight the opportunities and challenges shareholders face with the city’s food sector and develop a strategic approach to cultivating a reliable and economically sound food system for all Detroit residents.

The report arrived at a critical time for the future of Detroit’s food system. With a new mayor in office, burgeoning interest in the revitalization of the city and an increased national and regional focus on the importance of local food, it was timely for Detroit to discuss the role of efficient and equitable food systems in its economy. 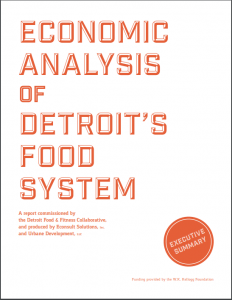