The Economic Case for Fixing Blight

Vacancy and blight can be found corroding property values and the quality of life of neighborhood residents. There are many housing studies that measure the impacts of such negative circumstances occurring in a neighborhood. For example, many papers have evaluated the neighborhood impact of foreclosures, which are a major cause of vacancy and blight. It is unsurprising that this research has shown that foreclosures can have a significant negative impact on nearby housing prices.

However, this relationship raises an interesting question:

Is this negative impact reversed when the problem is solved? In other words, if a blighted property is restored and inhabited, do nearby housing prices rise again?

When a house becomes vacant, there are several ways that a neighborhood can be negatively impacted. Without either an owner or renter in a residential property it may become blighted as the yard becomes overrun; trash may accumulate on the property from around the neighborhood; vandals may destroy windows that don’t get repaired; and the house may become occupied by squatters and serve as a magnet for crime. Ultimately, the situation comes up that neighbors would rather leave the community than live around blight. Problems like these affect perceived neighborhood quality and can have a significant negative impact on nearby housing prices.

Recognizing these negative impacts, a group of six neighborhood associations in Baltimore decided to fight back against blight using the legal system. The associations teamed up with the City of Baltimore to bring a suit against an owner of a large number of blighted properties within their boundaries.  In support of that effort, we examined how much blight was costing nearby property owners and, conversely, the positive impacts of eliminating blight.

The map below illustrates all active and abated vacancy citations from 2004 to 2012, the fifty one subject properties, and the boundaries of the community associations involved in the case. 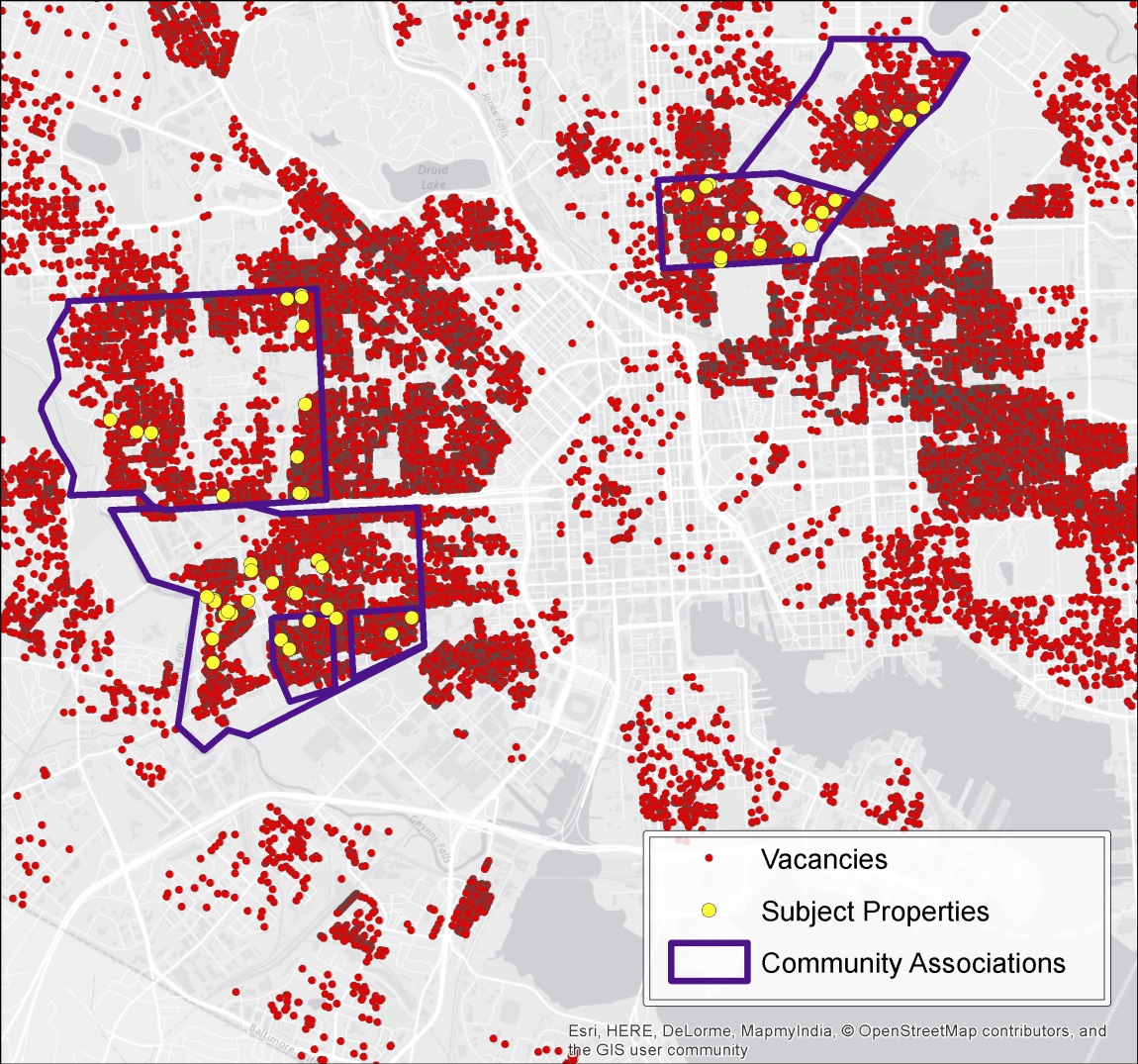 For this study we utilized a dataset of home sales provided by Baltimore Neighborhood Indicators Alliance, including nearly 45,000 observations from 2004 through 2012. We also used a dataset of blight citations issued by the City of Baltimore to property owners over time.  Most of the blight citations are for vacant properties. These citations are issued when a property becomes blighted or vacant and they remain in effect until the citation is abated. In addition to directly addressing whether a property is blighted or vacant, this data had the advantage of allowing for the identification of when a property is sufficiently improved to no longer being defined as blighted.

A classic hedonic regression model that is common in literature on housing prices was used to estimate the impact of vacancy and blight on nearby homes. The model defines house price as a function of property, neighborhood, and market characteristics as well as the number of vacancy citations (or abated citations) located within an eighth mile of the sale.

As you might imagine, the model indicates that the presence of vacant and blighted properties within an eighth of a mile of a home significantly reduces its value. We found that the presence of vacant and blighted property reduces value by between 0.4% when a significant amount of vacant properties are present and 3.5%, when there are fewer vacant properties present. In the case of the almost 10,000 properties in Baltimore affected by the subject vacancies, this amounted to an estimated $2.5 million in damage—roughly 1% of the total value of the affected properties.

But the study also suggested another important and encouraging fact: the positive effects of vacancy abatements are relatively symmetric with the negative effects of vacancy. We found that in the same way that each citation decreased nearby values by 0.4%, each abatement increased these values by 0.5%. This finding provides a hopeful outlook for the otherwise bleak story of neighborhood blight: reinvestment into individual properties can reverse the damage vacancy and blight cause to neighboring housing values.

Blight is not an incurable disease.  It is a call to action for neighborhood improvement.

Richard Voith is a President and Principal at Econsult Solutions, and is the current Chair of the Delaware Valley Chapter of the Counselors of Real Estate. He is a well-known expert in transportation and applied economics