Economic Impact Analyses on the Municipal Waste Industry in Pennsylvania 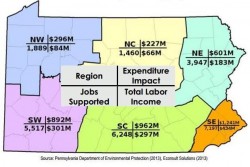 PWIA specifically represents the private-sector members of the industry and is the Pennsylvania state chapter of the National Waste & Recycling Association. The numbers in this study were determined using accepted economic methodology, based on official state and national data and information collected in a survey of Pennsylvania landfill operators, haulers, and recyclers. Most people put out their trash and recycling bins and think no more about them once they’ve been emptied. Most neither understand nor appreciate the magnitude of what lies behind this seemingly simple service. The traditional handling of solid waste and the rapidly-growing commitment to recycling (Pennsylvania’s statewide recovery rate of recyclables from the waste stream is 35 percent) combine as complementary elements that serve and benefit all Pennsylvanians. Among the report’s key findings:

The bottom-line conclusion of research is that the municipal waste industry in Pennsylvania produces a total economic impact of more than $4.2 billion a year and supports more than 26,000 jobs.