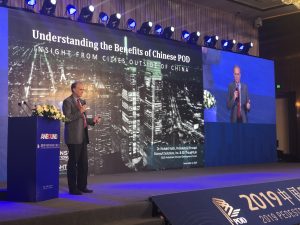 Richard Voith, Ph.D., President and Principal of Econsult Solutions, traveled to Chengdu, China to present “Understanding the Benefits of Chinese POD” at the inaugural Pedestrian Oriented Development Forum, hosted by Beijing-based Think Tank ANBOUND. Dr. Voith’s November 8th presentation was attended by more than 350 of China’s land use and transportation professionals eager to know more about how cities in the west are returning to human-scale planning and development.

Dr. Voith set the context by providing an overview of how China has urbanized over the last quarter-century with concurrent investments in transit expansion and high-density development but with little attention to the pedestrian experience. Juxtaposing the same period the United States when automobile transportation was promoted over transit which decentralized communities, Dr. Voith drew comparisons between the regions—in particular, the resulting traffic congestion, length of average commute, and the economic and human costs resulting from the move away from human-scaled, pedestrian-oriented placemaking. Dr. Voith highlighted large development investments in U.S. cities that have reintroduced and promoted pedestrian-scale design, walkability, and proximity to transit, including the Comcast Technology Campus in Center City Philadelphia, and the Big Dig in Boston. Both projects demonstrate that greater productivity is achieved through agglomeration.

The insights provided from outside of China reinforce ANBOUND’S research-based advocacy for Pedestrian Oriented Development (POD) in Chinese cities, where the think tank has been at the forefront. The first-ever POD forum brought together leading thinkers and designers from across the globe to share their experiences and gain a first-hand view of how the world’s most populous nation is grappling with urban issues that cities in industrialized nations have in common. Dr. Voith was also a panelist with experts from around China and the world who discussed what is working and what challenges still exist. 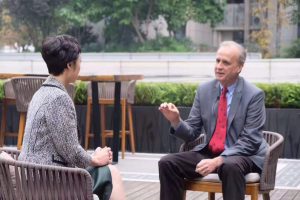 While in Chengdu, Dr. Voith discussed transit planning and urban economics during an interview with Sichuan Radio and Television. Philadelphia architect Daniela Voith, AICP, (wife of  Dr. Voith) also presented during the POD Forum. The Voith’s enjoyed the hospitality of our ANBOUND colleagues and their experiences in China.