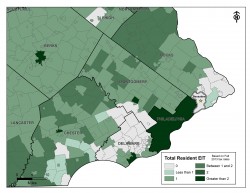 ESI vice president and principal Peter Angelides is quoted in this story from the Bucks County Courier Times on how an earned income tax (EIT) could help Falls Township, Pa.

Angelides said that an EIT could potentially “recapture” $2 million for Falls Township.

An excerpt from the article:

“Almost half of Falls residents who work pay an earned income tax to another municipality, an economic consultant said Monday night at the township supervisors’ meeting.

“Of the 48 percent who pay an EIT, 9 percent work in Philadelphia and pay the annual tax to the city, said Peter A. Angelides of Econsult Solutions. By law, Falls ‘cannot recapture’ the tax township residents pay to Philadelphia if they work there, he said.”

In recent years, local jurisdictions have added the EIT to their tax system. Most recently, Middletown Township, Pa., directly to the west of Falls Township, adopted an EIT for the 2014 calendar year.