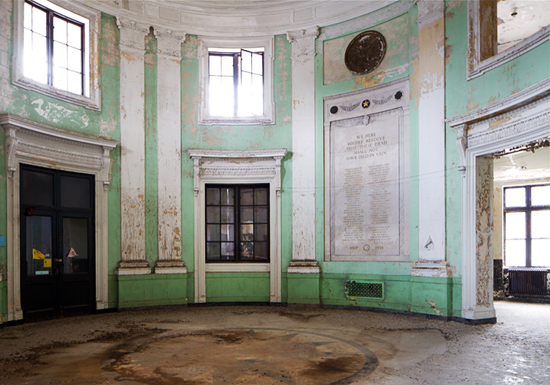 The Hidden City Philadelphia Festival celebrates the power of place through the imagination of contemporary artists, inspiring people to explore the city’s history and imagine new futures for our urban landscape. Artists of diverse disciplines and media create site-specific work that illuminates abandoned, obscure or inaccessible sites throughout the city.

The Hidden City Festival 2013 will take place from May 23rd to June 30th, and feature a wide array of installations, performances, exhibitions, talks and tours. Tickets go on sale May 1–sign up to be notified by email about special discounts, performances and events.

The festival will feature nine sites of historical and community interest, including several buildings looking for new ideas to bring them back to life, from the vacant and beguiling Germantown Town Hall, to Shivtei Yeshuron, a 19th century row house synagogue in South Philadelphia.

Creative Director Lee Tusman has curated a series of 10 projects ranging from social experiments that invite the audience to participate, such as Jacob Wick’s creation of government offices for an imaginary “Free Germantown” inside Germantown Town Hall, to massive, sculptural installations by the collectives Rabid Hands and Dufala Brothers. The lineup of artists also includes the collectives Camp Little Hope, King Britt and Data Garden, Ars Nova Workshop, and artists Ben Neiditz and Zach Webber, Andrew Dahlgren, and Ruth Scott.

Funding, volunteers and materials for this year’s festival are being crowdsourced through this web platform, which was developed by Hidden City with the help of a grant from the Barra Foundation. The festival is also funded in part with grants from the John S. and James L. Knight Foundation and the Andy Warhol Foundation for the Visual Arts.

This will the second Hidden City Festival. The first one in 2009 captured the public’s imagination by opening up remarkable buildings such as the Metropolitan Opera House, Royal Theater, Shiloh Baptist Church and Disston Saw Works.

via Hidden City | About.