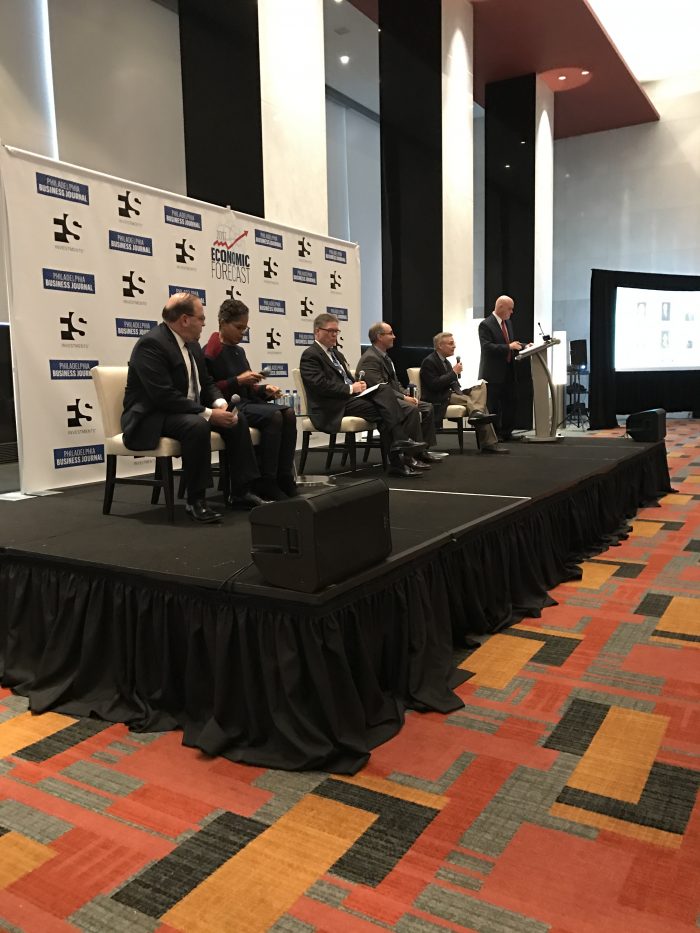 For this year’s Philadelphia Business Journal Economic Forecast 2017, both our President, Stephen Mullin, and our Senior Advisor and President of Naroff Economic Advisors, Joel Naroff, were selected to be part of the first panel, “What’s Next for Greater Philadelphia in 2017?” on Thursday, January 12, 2017 at the Loews Hotel in Philadelphia, PA. To fill out the rest of their panel, Patrick Pilch, Co-Founder and Co-Leader of BDO Center for Healthcare Excellence & Innovation, Shelley Smith, Partner at Archer and Former Philadelphia City Solicitor, and Allan Domb, Councilman-At-Large for the City of Philadelphia, shared their insight and thoughts on the future of the city.

The conference began with opening remarks and a presentation, from Kara Markley, an Economic Analysis and Information Chief from the Bureau of Labor Statistics, which discussed “The Greater Philadelphia Economy: Where Do We Stand?” and presented Philadelphia in comparison to other east coast cities such as New York, Boston, and DC.

Mr. Naroff kicked off the panel discussion with the positive trends occurring in the region such as the influx of millennials as well as technology and energy trends. Mr. Mullin forecasted continued positive structural population and demand increases for the city and metro area. However, he cautioned that as the national economy may be seeing lower business tax rates and regulations, the region’s cost structure (especially Philadelphia City) will make Philadelphia relatively less attractive as a business location due to its higher regulatory and tax burdens, and labor costs. Also, a problem with the region’s inability to take advantage of potential comparative advantages of being so  close to the Marcellus Shale due to lack of new pipeline infrastructure, thereby missing out on lower energy costs region-wide. Mr. Pilch offered his knowledge on the changes that will come to healthcare under the new presidency including Obamacare, accessibility, and the Philadelphia market. Ms. Smith and Mr. Domb wrapped up the panel with a large discussion on education and its importance in the region. In regard to real estate, Mr. Domb said, “The city is doing the best I’ve ever seen it,” and encouraged those living in the suburbs to consider living in the city. 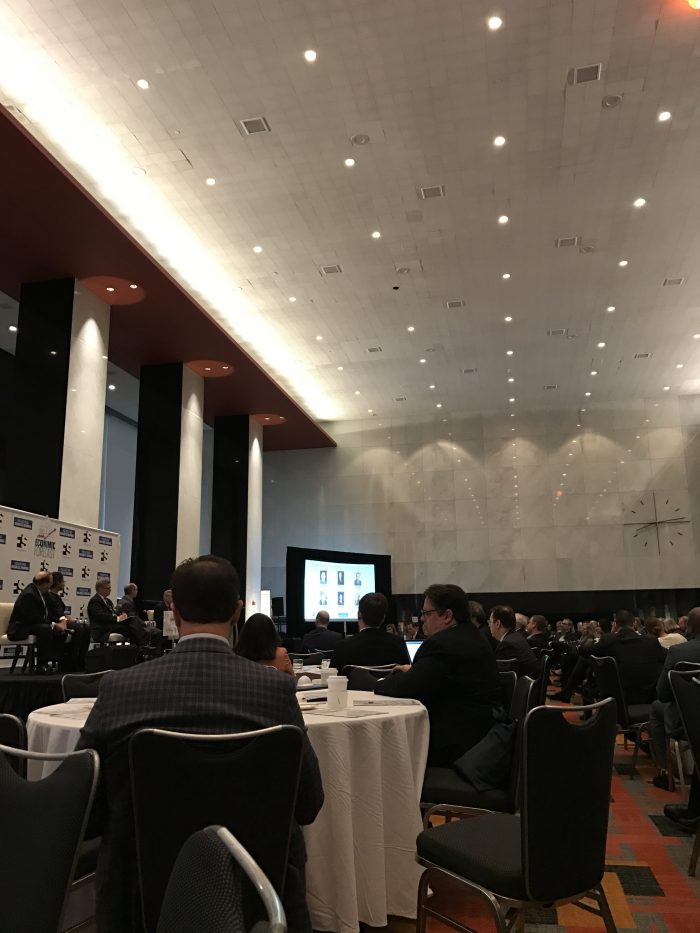 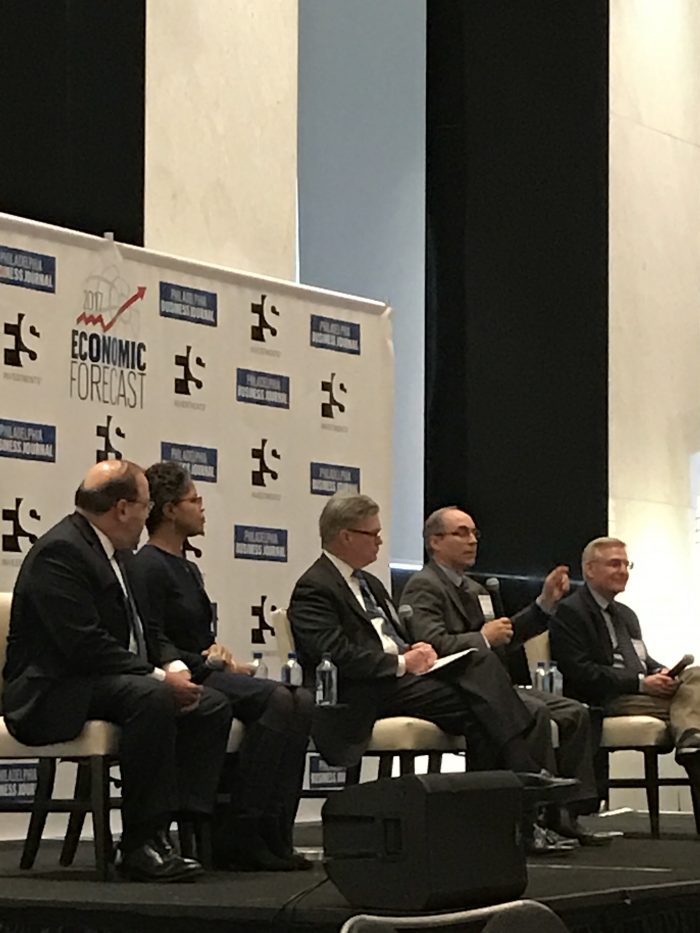 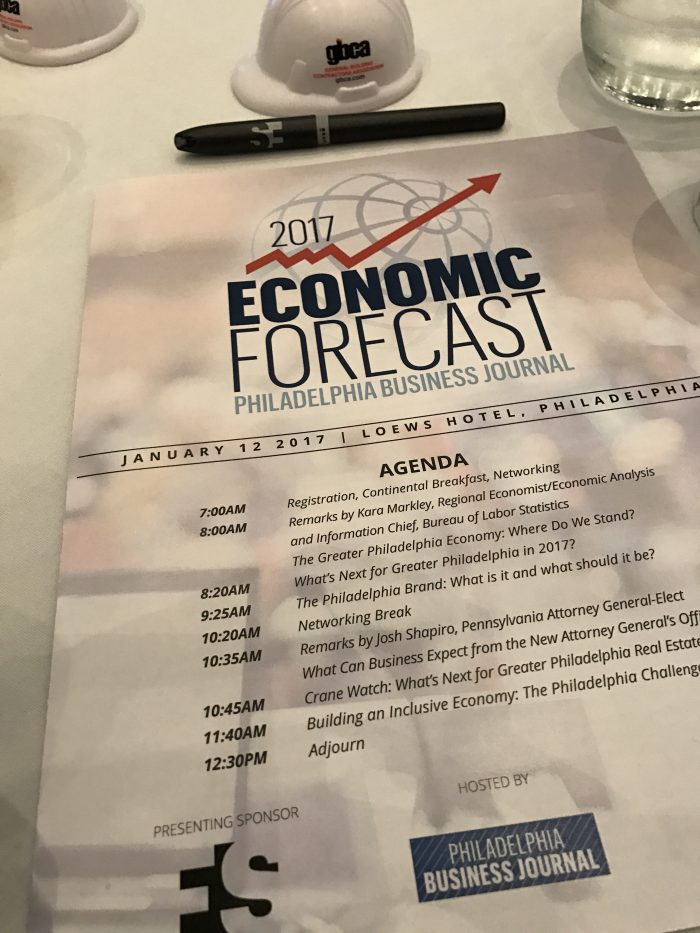 The following panel topic was “The Philadelphia Brand: What is it and what should it be?” featuring  John Fry, President of Drexel University and Chairman of the Greater Philadelphia Chamber of Commerce, Michael Heller, President and CEO of Cozen O’Connor, Michael Forman, Chairman and CEO of FS Investments, Gerry Cuddy, CEO of Beneficial Bank, and Cedric Rockamore, Vice President of American Airlines.

After a networking break, the program resumed with remarks from Josh Shapiro, the Pennsylvania Attorney General-Elect, who spoke on “What Can Business Expect from the New Attorney General’s Office.”