The Fiscal Impacts of Insufficient Retirement Savings in Colorado

ESI was commissioned in 2019 by the legislatively created Colorado Secure Savings Plan Board to study the economic and fiscal impacts of insufficient retirement savings in Colorado as part of the state’s consideration of efforts to address inadequate retirement preparedness among private sector workers. The analysis demonstrated that the financial capacity of elderly households to maintain their living standards during their retirement years has significant impacts for the state’s future fiscal and economic health, in addition to the quality of life implications for its residents.

Like many states, Colorado’s fiscal position is impacted by anticipated demographic changes driven by the retirement of the baby boomer generation. On top of these demographic changes, the level of savings achieved by future retirees will dictate their annual available income in retirement. This in turn will impact their eligibility and benefit levels for many state funded programs, as well as the disposable income available to elderly households to circulate in the state economy.

ESI’s analysis quantified the potential impact of insufficient retiree savings, as reflected in current and anticipated shortfalls in retiree income relative to recommended income replacement standards. Among the majority of Colorado’s senior (65+) households with less than $75,000 in annual income, the average retirement income gap totals about $4,800 per year. Financial modeling indicates that this retirement preparedness gap could be addressed through annual savings of around $1,200 over a thirty-year period, using standard investment assumptions.

This gap in retirement savings was translated into increased state program expenditures and reduced state tax revenue collections. The anticipated net impact from insufficient savings totals nearly $10 billion over the fifteen-year period from 2021-2035.

ESI’s report was included in the February 2020 report and recommendations to the Colorado Legislature issued by the Secure Savings Plan Board. 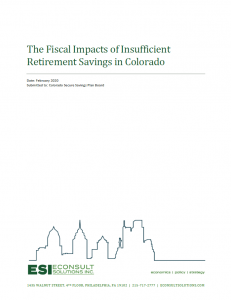