ESI was commissioned in 2019 by The Philadelphia International Airport (“PHL”) and Northeast Philadelphia Airport (“PNE”), to study the direct and indirect regional economic impacts attributable to PHL on an annual basis, updating a similar analysis from 2017.

PHL serves a hub of activity and for the 11-county Philadelphia Metropolitan Statistical Area (MSA). Supporting the movement of more 31.7 million passengers annually, PHL is also a major center of employment and procurement activity. Using a custom economic impact model through the IMPLAN’s input/output modeling framework, ESI found that the direct and indirect economic activity associated with PHL annually produces $16.8 billion in output within the 11-county Philadelphia MSA, supporting 106,800 jobs and $5.4 billion in total earnings.

The airport is financially self-sustaining and receives no local tax dollars. Further, the economic activity it supports has significant fiscal impacts for state government and for local jurisdictions, generating $123 million in annual tax revenue for the City of Philadelphia and $396 million in state tax revenues for the four states touching the Greater Philadelphia region.

The report shows that the benefits of this significant center of economic activity are shared equitably by local residents and firms, and by employees of color and disadvantaged business enterprises. Additionally, the airport’s extensive national and international network of air service connections through PHL allows regional residents to easily access destinations, saving them on travel time and costs.

What is the best decision you’ve made in the nearly four years you’ve been CEO?

“Commissioning an Economic Impact Study two years ago was one of the most meaningful decisions I’ve made so far. The study breaks down the airport’s economic impact by state and county, which enables us to better communicate with stakeholders about how important they are to us, and how much we contribute to them. I’ve taken that study on the road to try and push out these local messages, and in doing so we have forged new relationships and reinforced existing ones. For example, we now have stronger relationships with all of the Chambers of Commerce in our catchment area, including South Jersey, New Castle County in Delaware, Montgomery County, Bucks County, Delaware County, Chester County, Northeast Philadelphia and beyond.” 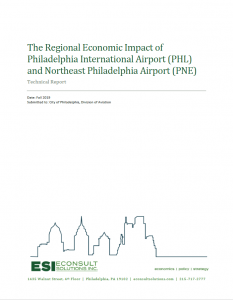