Estimating the Potential Market for Energy-efficient Retrofits for Commercial Property

Econsult Corporation was contracted by the Greater Philadelphia Innovation Cluster (GPIC) to estimate the potential market for energy-efficient retrofits to commercial and industrial properties in the Philadelphia area. GPIC is a consortium that received a $129 million from the Federal Government to develop innovative energy efficient building technologies, designs and systems. As part of this initiative, GPIC contracted Econsult to develop an estimate of the size and characteristics of the potential regional market for energy-saving building retrofits. This report was one of a series of preliminary analyses, or “Baseline Reports,” which helped to give further structure and detail to the overall project.

Econsult’s final report indicated that Philadelphia’s position as a large, older, formerly industrial metropolitan area in the northeastern U.S. made its stock of commercial properties generally more aged — and hence more energy-inefficient — than the average U.S. metropolitan area, and hence would seem a likely candidate for energy retrofits to reduce both its energy consumption and utility expenditures. Using a property-level file containing detailed data on the region’s stock of commercial and industrial buildings, Econsult devised a series of metrics that characterized each property’s suitability for a retrofit based upon its age, size, configuration, use, exterior type and mechanical efficiency. The report found that 47 percent of the region’s stock, covering 154 million square feet of space would likely benefit significantly from energy-efficient retrofits, and that this would add $618 million to the region’s economy, supporting 23,500 jobs. 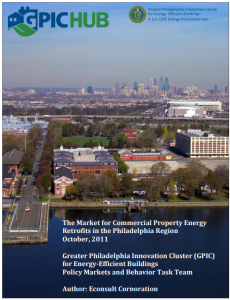