PA Agriculture: A Staple of the Economy

Agriculture has been and continues to be an integral part of Pennsylvania’s economy. According to a previous report published in 2021 by ESI, “Pennsylvania’s $81.5 billion agriculture sector supported 301,900 direct jobs and $14.5 billion in labor income.” Farms are located in all 67 counties within the state, providing necessary support to all Pennsylvanians in the form of jobs, economic output, and livelihood. Without continued support and success of Pennsylvania’s agriculture sector, the state would lose a multi-billion dollar industry that is supported by both domestic and migrant workers.

Working in agriculture can be intense and demanding. Farm labor can be tiresome, requiring a full day’s work every day of the week. According to FWD.us, a pro-immigration lobbying group, “farmworkers spend extremely long hours harvesting crops in all types of weather while risking injury or illness from heavy equipment or pesticide exposure.” Given the challenges of the work and the lack of competitive pay, combined with a rapidly aging population employed in the agricultural sector, Pennsylvania has seen a decrease in domestic-born employment and a rise in migrant employment. In fact, in almost every county in the state, total farm employment has been steadily decreasing over the past five years. In order to sustain the level of economic output and to keep producing vital resources for Pennsylvania and the country, it is necessary to invest in migrant agricultural worker programs.

Of the many programs that support migrant workers, the H-2A program is the main initiative that supports migrant workers in the United States. The program, according to the U.S. Citizenship and Immigration Services, “allows U.S. employers or U.S. agents who meet specific regulatory requirements to bring foreign nationals to the United States to fill temporary agricultural jobs.” Over the past decade, the number of workers in the Federal H-2A Visa program has tripled in the state of Pennsylvania, demonstrating the importance of migrant workers for agricultural economic success. 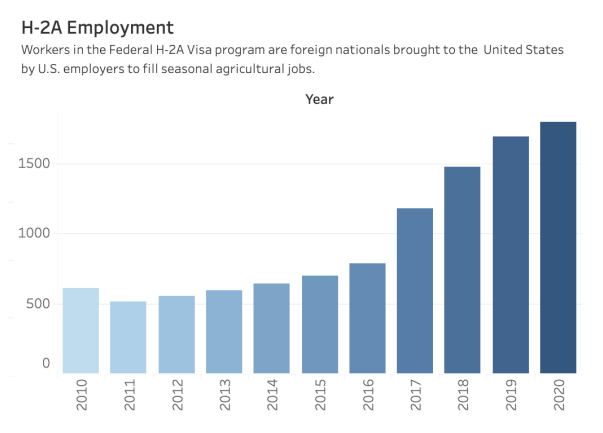 The bulk of this increase in H-2A employment is occurring in counties that are heavily focused on commercial agriculture. For example, Adams County experienced a 900 percent increase in the number of H-2A workers, neighboring Franklin County witnessed a 1,000 percent increase, and Berks County saw a similar increase of nearly 1,300 percent. Further, the share of H-2A workers as a percentage of total farm employment has been increasing. Since 2010, it has nearly doubled state-wide, with multiple-hundred percent increases in counties like Adams and Luzerne.

This increase in reliance on H-2A workers to supplement, but not replace the declining domestic farm workforce is accompanied by evidence showing that the PA agriculture sector is strikingly resilient. As a pertinent example well-ingrained in recent memory, the nationwide effects of COVID-19 on the U.S. agriculture industry have been unprecedented. Strains on the domestic food supply chain worsened by deteriorating trade relations, coupled with widespread labor shortages, put pressure on domestic farm owners to cut output and internalize the associated costs.

Despite the pandemic’s impact, Pennsylvania’s agricultural industry through 2020 has been remarkably resilient. Total farm employment decreased by 4 percent between 2019 and 2020 compared to an eight percent decrease in non-farm employment across the Commonwealth. This suggests that Pennsylvania’s agricultural sector has been largely effective, partially through the continued expansion of the H-2A program, in mitigating the overall employment effects of COVID-19. Proprietor farm employment stayed relatively constant across counties through 2020, as did proprietor income (which even increased in some counties) and the wages and salaries of agricultural workers. These findings provide evidence that demand for the goods produced by the state’s agricultural sector remained strong through the worst of the pandemic, despite serious negative consequences felt in other parts of the country and by other industries. This demonstrates that agriculture remains, and likely will continue to remain, an important industry for the state.

Due to the great resignation and the tightening of the domestic labor market, combined with trends in domestic-born agricultural employment, employers are going to need to rely more on migrant workers. According to the U.S. Department of Agriculture, over the past decade nationwide, “H-2A positions certified by the U.S. Department of Labor increased more than 220 percent.” There is no reason to think that this trend will reverse, making it critical that this department has enough resources to serve the expanding labor demand. The United States heavily relies on its agriculture production, thus making the H-2A program integral to both the country’s prosperity and Pennsylvania’s economic success.

Jacob Kayser is a research assistant intern for Econsult Solutions Inc. (ESI). He is a senior at the University of Pennsylvania, majoring in Urban Studies with a minor in Survey Research and Data Analytics. Jacob is originally from Chicago and has a passion for transportation and housing policy.

Kian Williams is a research assistant intern for Econsult Solutions Inc. (ESI). He is currently an Economics major and Political Science and Math minor studying at Haverford College. and is interested in consulting, international development, global finance, and geopolitics.