WYOMISSING, Pa. – The design and construction of the PennEast Pipeline will generate approximately $1.6 billion in additional wages, revenues and investments to regional and state economies of Pennsylvania and New Jersey, according to a new Drexel University study released today.

“PennEast Pipeline Project Economic Impact Analysis,” co-authored by Econsult Solutions, finds that the proposed project would have a major, positive impact on the economies of the two states in which it would be built and operated.

According to researchers, design and construction of the PennEast Pipeline would support approximately 12,160 jobs and an associated $740 million in wages. Additionally, the ongoing operation of the pipeline would generate approximately $23 million in annual economic impact, supporting 98 jobs with $8.3 million in wages. Even greater economic impact from ongoing operations would be realized from the new supply of natural gas to PennEast customers in the Pennsylvania and New Jersey markets.

“Drexel’s analysis illustrates the substantial economic benefit of the PennEast Pipeline,” said Peter Terranova, chairman of the PennEast Pipeline board of managers. “As a large infrastructural improvement project, it will support thousands of jobs and generate more than a billion and a half dollars of economic activity in Pennsylvania and New Jersey. The sustained long-term value of PennEast also would be realized in the form of lower energy bills to consumers.”

“This project will deliver what our region is most sorely in need of: jobs,” said Fred Potter, president of Teamsters Local Union 469 in New Jersey. “This project will put several hundred New Jersey tradesmen to work at a time when our economy is dependent on getting people back to work.”

Key findings from the analysis include:

“We find that the immediate construction and labor impacts of the PennEast Pipeline Project are substantial and would greatly benefit local communities through construction, labor and project management jobs,” said Vibhas Madan, professor of economics at Drexel University LeBow College of Business. “Construction and ongoing operations of the project would be economically beneficial to the counties the pipeline would cross, as well as to both states as a whole. Lower energy bills lead to an increase in disposable income for consumers, allowing for additional spending in the economy. For instance, we estimate that every $10 million in increased disposable income, derived from lower energy prices, would generate a total economic impact of $13.5 million and support 90 jobs.”

“The PennEast Pipeline will provide affordable energy and security for years to come benefitting, families, manufacturers and power generators,” said Terranova. “We’re extremely excited to better understand the overall economic benefits the region will realize due to this project. 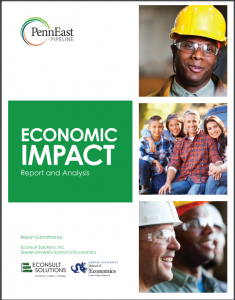