The Potential Economic Impact of the Redevelopment of the PES Refinery

The Philadelphia Energy Solutions (PES) refinery in south Philadelphia had fallen to disuse. Hilco Redevelopment Partners developed plans for redevelopment of the brownfield, and enlisted Econsult Solutions to conduct an economic impact analysis of their projected reuse of the land for a mixed-use e-commerce and logistics center park. Repurposing the land is of great interest to create jobs, and keep in productive use a large tract of land with good access.

ESI analyzed the potential economic impact of both the upfront economic activity generated by the redevelopment of the site and its ongoing operations. We concluded that the proposed redevelopment would make a significant impact within the Philadelphia and Pennsylvania, by reactivating a significant center of employment and economic activities in the region. In addition, we also framed these impacts on the surrounding community, including contributions directly to the community and for local programming.

Using standard input-output modeling techniques and multipliers, ESI translated construction investments into the commensurate impacts on the Philadelphia and Pennsylvania economies. We estimated the ramifications of this composition of economic activity on one-time and annual boosts to tax revenues to the City and the Commonwealth. 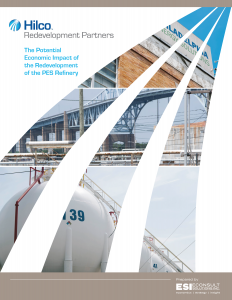 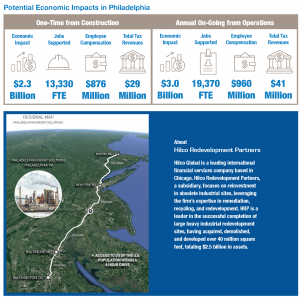