Econsult Solutions Inc. (ESI) was asked by SEPTA to examine the equity implications for residents of SEPTA’s proposed fare restructuring for its city transit division for FY 2021-2023.

ESI undertook an analysis of the patterns in ridership and fare products utilized in order to understand changes in average costs for different communities and populations across the city. Equity measures were defined based on the share of income that riders pay for a roundtrip under the current and proposed fare structure, relative to changes in income.

The lowest income Philadelphians will spend less of their income on transportation with this proposal. On net across all Philadelphia residents, the restructuring decreases the average roundtrip fare as a share of income by 0.6%. Analysis of ridership patterns shows that the incidence of the change in fare is significantly progressive in its effects:

In addition, SEPTA’s proposed fare policy will unlock long-term benefits to SEPTA and its riders by enabling more efficient system design and use. 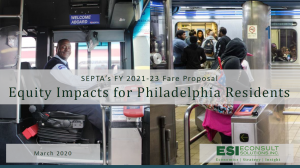