The study, commissioned by Sunoco Logistics, is designed to forecast the potential economic and fiscal impacts of its proposed Mariner East projects on the Commonwealth’s economy, including the development of a 50-mile pipeline that connects with an existing pipeline, construction of a new 350-mile pipeline, and the repurposing of its Marcus Hook Industrial Complex to store and process natural gas liquids (NGLs).

SXL recently announced plans to invest approximately $3 billion in Pennsylvania for the Mariner East projects to transport NGLs from western Pennsylvania, West Virginia, and eastern Ohio to its Marcus Hook Industrial Complex – a former oil refinery – for storage, processing, and distribution of NGLs, such as propane, ethane, and butane.

The study finds that construction of the Mariner East projects will support an estimated 30,000 direct, indirect and induced jobs throughout the construction period, including direct jobs in the construction industry as well as architectural and engineering jobs, wholesale trade business jobs, and professional, scientific, and technical service jobs. According to the study, the projects will generate an estimated $23 million in personal income tax to the Commonwealth throughout the construction period plus a secondary potential fiscal impact for a total $62 million in tax revenues for the Commonwealth from direct, indirect and induced activities of SXL, its vendors and employees.

In addition to construction benefits, the study projects that NGL transport, processing and distribution from the Mariner East projects will create a recurring economic impact from ongoing operations. Although the total expenditure for operations at the Marcus Hook Industrial Complex has not been finalized, SXL predicts spending between $60 and $90 million annually to operate the pipeline projects beginning in 2017. Throughout the entire Commonwealth, the total economic impact of the projects’ ongoing service is estimated to be between $100 and $150 million annually, supporting between 300 to 400 full time equivalent jobs with estimated earnings of $22 million to $33 million.  Ongoing operations and their spillover impacts will generate between $800,000 and $1.2 million in annual tax revenue to the Commonwealth. The majority of employment and expenditure impacts are estimated to be in the southeastern Pennsylvania region (including the City of Philadelphia and Montgomery, Bucks, Delaware and Chester counties) due to the ongoing operations at Marcus Hook Industrial Complex, according to the study.

“Our numbers indicate that the Mariner East project will significantly impact the state’s economy, from the jobs it will create and support, both temporary and permanent, to the tax revenues generated for the Commonwealth,” said Stephen P. Mullin, President and Principal of Econsult Solutions, Inc. “You just don’t see companies investing $3 billion on capital projects in Pennsylvania every day.”

The Mariner East projects will increase the locally available domestic supply of propane, meeting both the residential need for propane and the commercial need for propane and other NGLs as inputs to catalyze regional manufacturing. Additionally, new business and job opportunities may also become available in southeastern Pennsylvania due to the stabilized local supply of NGLs.

Econsult Solutions, Inc. used an econometric model to estimate the direct and indirect economic benefits of both the construction of the Mariner East pipelines and the renovations at the Marcus Hook Industrial Complex and their ongoing operations. The model estimated the purchase of goods and services from local vendors, labor income spent by employees regionally, and other spillover economic impacts, and translated these economic impacts into the generation of estimated tax revenues. 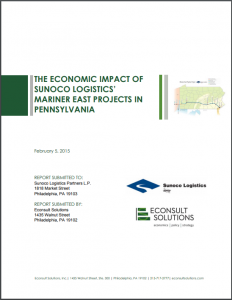