Econsult Solutions, Inc. (ESI) produced the second of three reports in a series commissioned by The Rowan University/Rutgers-Camden Board of Governors (RURCBOG) to determine the potential economic gains of its efforts at both a local and statewide level. The initial report outlined the importance of “Eds and Meds” as an economic engine for the City of Camden and the State of New Jersey, while the second report estimates the magnitude of this impact on the City and State economies and on their tax bases.

For this report, ESI used IMPLAN, an industry standard input-output modeling software program, to generate economic and fiscal impact estimates. In addition to the input-output modeling, the report examined the impacts of similar national joint health science efforts to demonstrate that the approach taken by RURCBOG has successfully enhanced research efforts, educational experiences, and economic benefits of university partnerships.

An important way that RURCBOG will be contributing to the City and State economy is through its capital investments in creating both the Joint Health Sciences Center and the Healthcare Simulation Center. ESI discovered that through construction alone, the development of these two centers will generate approximately $122 million in economic impact, and $3 million in revenue for the State. Additionally, the centers will impact the Camden and New Jersey economies annually through employment, procurement, and the provision of educational, medical, and legal services.

Through this analysis, ESI determined that the State’s investments in RURCBOG have yielded a meaningful financial return. This is represented not just in the immediate and direct economic impacts they have produced, but also in the ways they have positioned the State for future economic competitiveness. 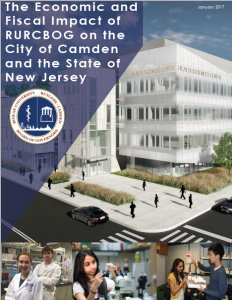