In December, I looked at the effect of random ballot position on Philadelphia’s Court of Common Pleas election. The stark reality: the pure luck of drawing a position in the first column of the ballot was worth more than the endorsement of the Democratic City Committee, the Philadelphia Inquirer, or the Philadelphia Bar Association’s Judicial Commission. Today, let’s dig into the effect within neighborhoods.

One interesting question regarding this solution is: What neighborhoods are most affected by ballot position? Even randomizing across wards, a candidate who won top ballot position in a ward where ballot position was particularly important would still have an unearned advantage. Perhaps we can take the randomization one step farther, linking the lottery in wards in which ballot position is particularly important so that a candidate with a great spot in one ward would have a low spot in another. (It’s worth an aside that even the naïve system of unlinked lotteries across wards is strictly better than the present situation. The worst case scenario in that lottery would be a single candidate somehow winning in every ward’s lottery, and getting the top position in each ward. You may recognize this as the system we already have).

But first, what is the role of ballot position within neighborhoods?

Where does ballot position matter?

In what wards and divisions in the city is ballot position most important? For this analysis, I again use the Court of Common Pleas primary elections in 2009, 2011, 2013, and 2015. Figure 1 maps the average percentage of the vote won by candidates in the first column of the ballot. Remember that while the top ballot position helped most, all candidates in the first column received a large boost; for simplicity I’ve lumped them all together. The white outlines are the ward boundaries.

North Philly and western-West Philly light up: in almost every division, the average first-column candidate won more than 6% of the vote. This number may not seem high, but remember that with voters able to select multiple candidates, 6% of the vote will usually make you judge. Because ballot position is randomized, this is purely causal; it is ballot position that causes this pattern, and not that first-column candidates tended to have another trait that could drive this trend. 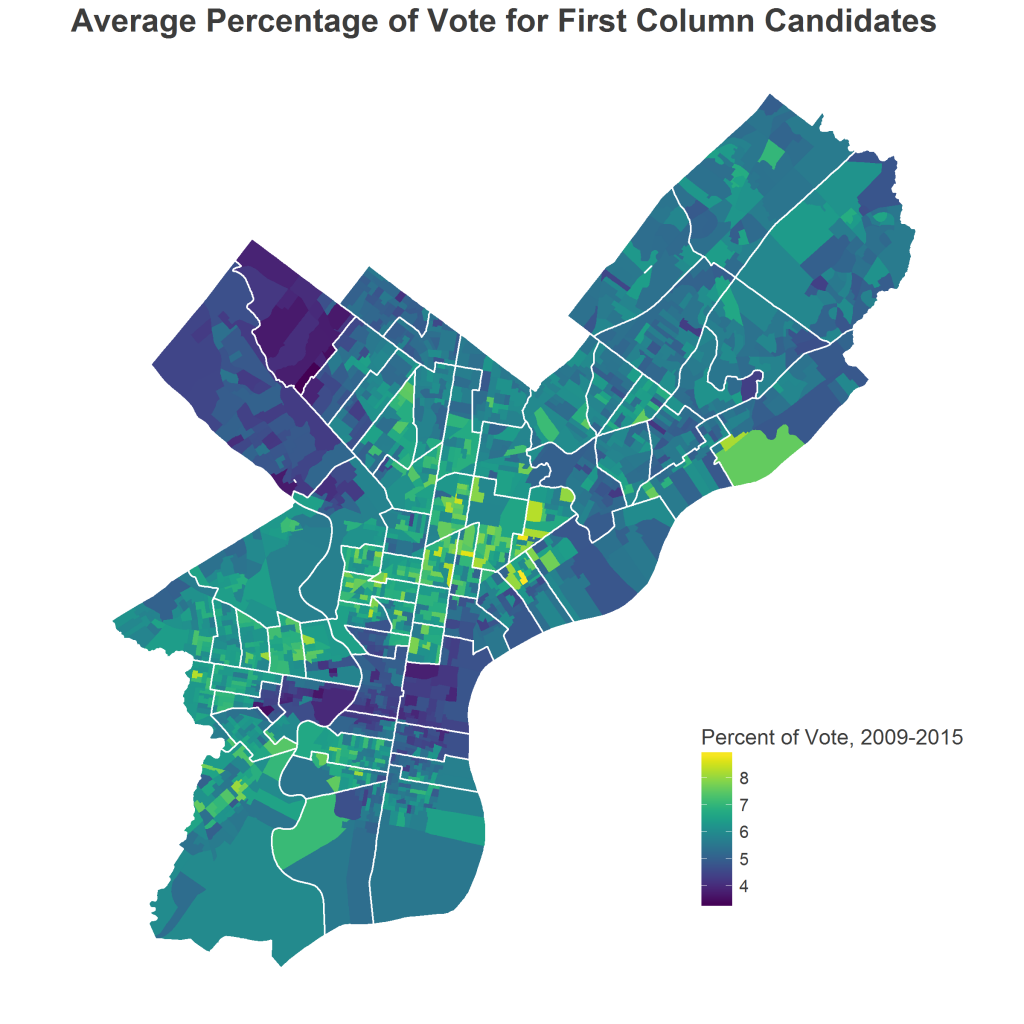 The noticeable dark spots on the map are in Center City/University City and Mount Airy/Chestnut Hill. In these neighborhoods, the first-column candidates are winning only about 4% of the vote. This is still more than the all-candidate average of 3.1%, but much less so.

What predicts the votes of these Center City and Northwest Philly wards instead? The Philadelphia Inquirer. Figure 2 plots the percent of the vote won by Inquirer endorsees. The same voters that weren’t giving first-column candidates a preference are instead disproportionately voting for candidates endorsed by the paper. Note that the Inquirer endorsees are not mutually exclusive from first-column candidates, so these two maps capture some of the same candidates. Also, because an Inquirer endorsement is not randomized, it is likely that some of the pattern is actually a proxy for other things that might be correlated to Inquirer endorsements, such as candidate quality, campaigning, or campaign budget. It may also be that the ward leaders in these neighborhoods tend to endorse the same candidates as the Inquirer. (More on ward leader endorsements at the end of this post.) 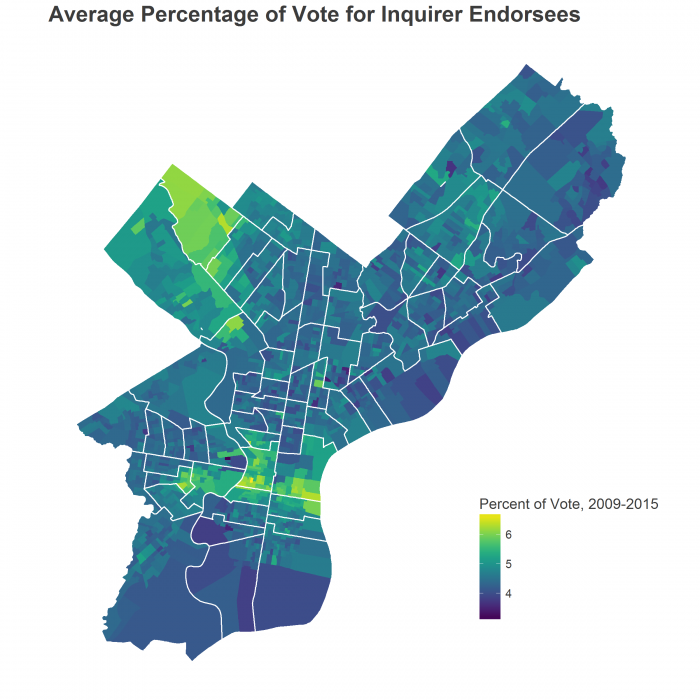 Where does the Democratic City Committee endorsement matter? Interestingly, there isn’t the same type of pattern. Figure 3 maps the average percentage of the vote won by Democratic endorsees. North and West Philly have some divisions with high vote rates, but the geographic pattern is much less noticeable. This is for the city party endorsements as a whole, and it may be the case that ward leaders are endorsing different candidates from the party. 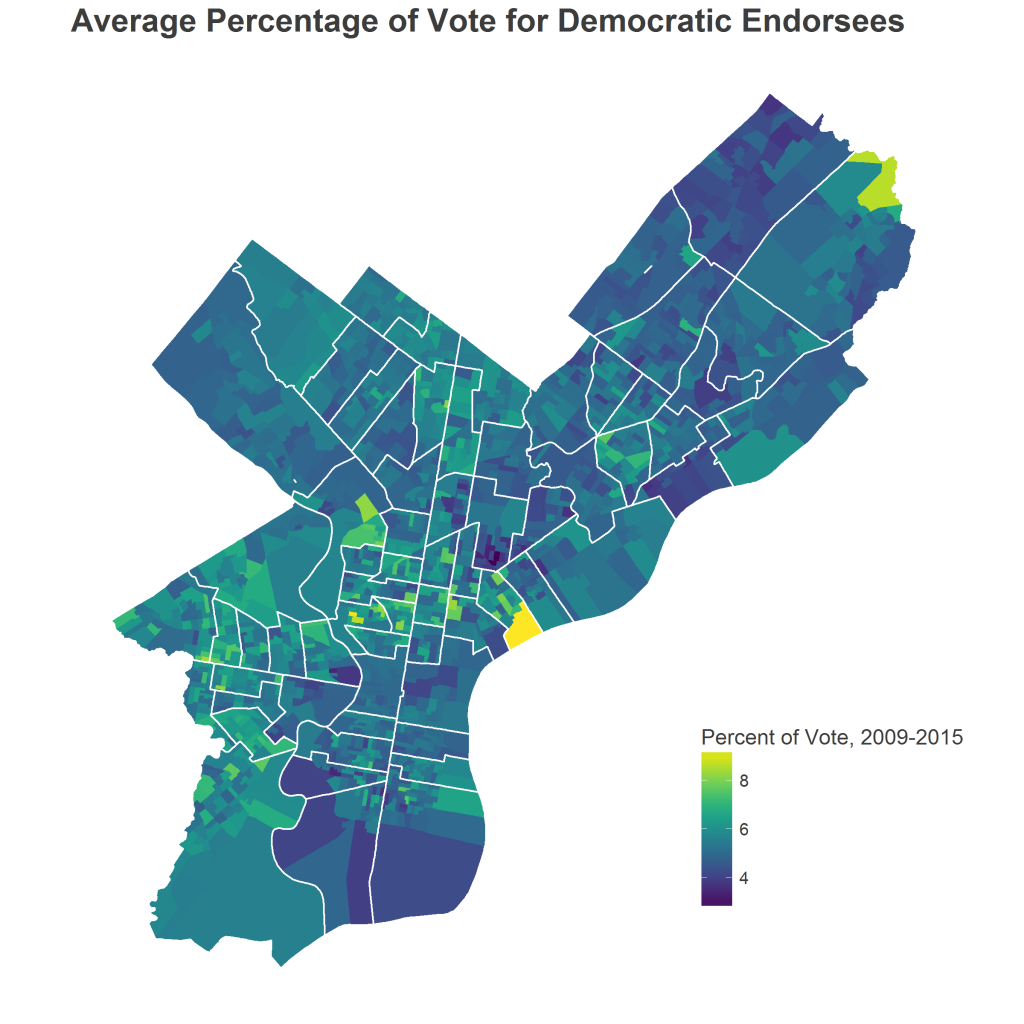 The Ballot Position Effect is an Income Effect

Readers familiar with Philadelphia will recognize that the neighborhoods that vote disproportionately for first-column candidates are also Philadelphia’s poorest. Figure 4 plots the percent of the vote for each type of candidate versus the division’s median household income from the 2008-2012 American Community Survey[1] . First-column candidates do much better in low-income neighborhoods, and have steeper income dependence than the other two effects. Voters in low-income neighborhoods are most influenced by ballot position. 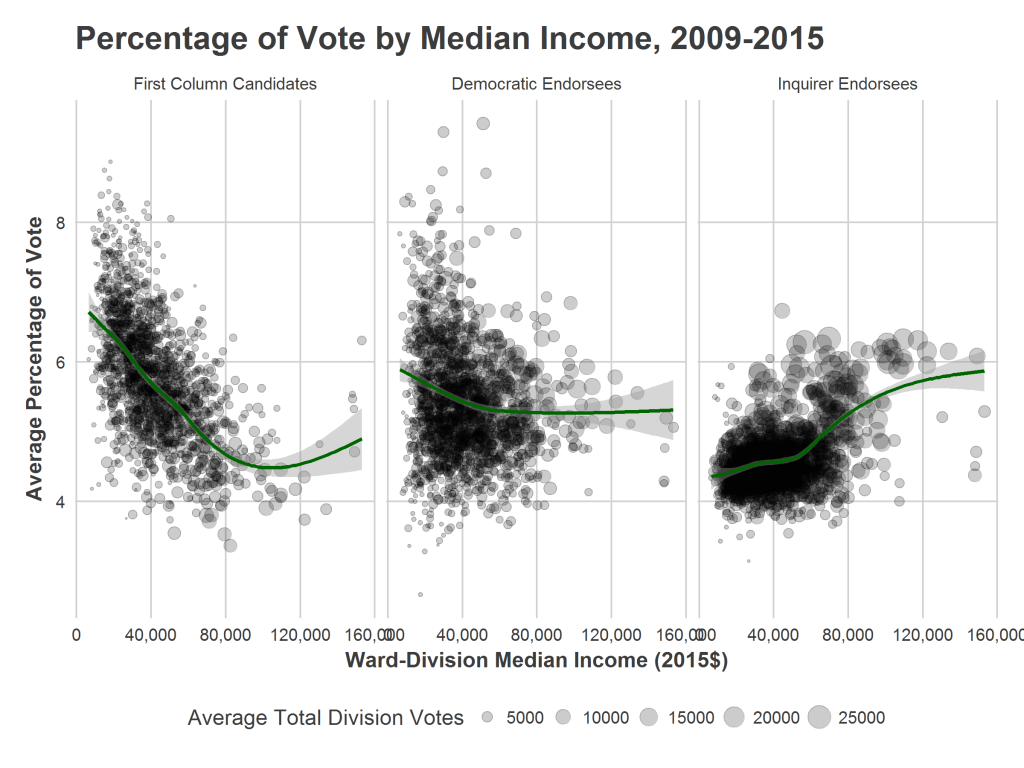 The Democratic Party effect shows a much shallower income trend; candidates do better than the 3.1% baseline in every neighborhood, and that is only slightly more true in poor neighborhoods than in wealthy ones. One important story that may be buried in this plot is the effect of ward leaders who independently endorse different candidates than the city-wide party; more on that below.

The Inquirer endorsees, on the other hand, do better in wealthier neighborhoods. A jump in the votes for its endorsees appears around wards with median incomes of $60,000. The group of neighborhoods with incomes around $40,000 that seem to have high Inquirer effects are mostly divisions around Penn and Drexel. As I pointed out above, it’s worth noting that this may not be due to the Inquirer itself, but instead it could be the case that candidates who receive the Inquirer endorsement typically have other traits that are attractive to voters in wealthier wards.

What does this all mean?

Voters all across the city vote more for candidates in the first column, but voters in poorer neighborhoods of North and West Philly do so at especially high rates. So where do we go from here? In the longer term, this means that election reform might link ballot position in poor neighborhoods, so that a candidate with a good position in one ward had a bad position in another. The effect would wash out, and other candidate traits would prove decisive. In the shorter term, this might have a lesson for outreach: the neighborhoods where ballot position matters a lot might be exactly where candidates should purposefully reach out to in order to combat its effects and gain votes.

A follow-up note: ward endorsements may matter the most

In the last ballot position post, I used only the endorsements of the city-wide Democratic Committee. However, ward leaders can and do endorse their own candidates. These local endorsements may prove more important than the party endorsements as a whole, as it’s these endorsements that are handed out in flyer form as “sample ballots” on Election Day. Of course, this system, and its Street Money, is notorious in the city.

Before revealing the results, I should note that the sample is far from representative. Figure 5 highlights the wards for which Phillyballots has pictures. These are mostly in Center City, South Philly, and Northwest Philly, and far from representative of the city as a whole. These are also wards where we would expect ballot position to be less important, in light of the discussion above. And I only have the data for 2015. 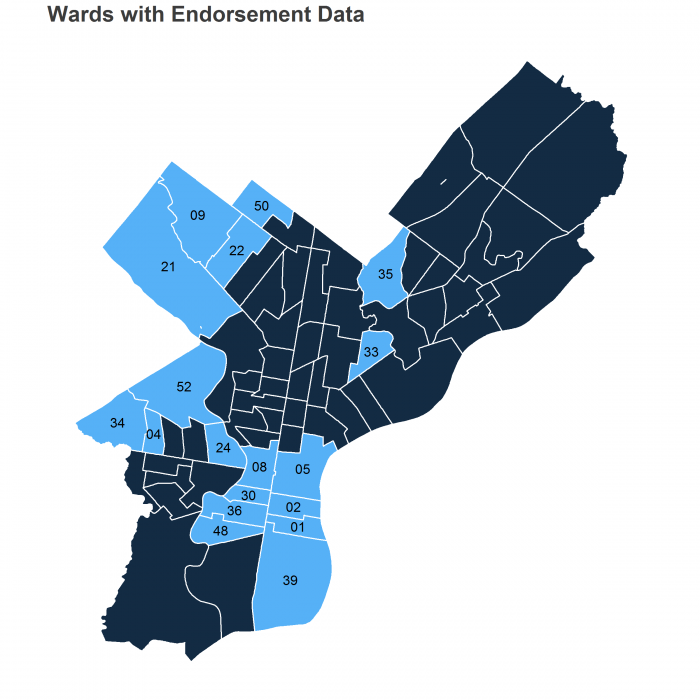 Having stipulated that, let’s tentatively estimate the effect of a ward leader’s endorsement. I have limited the election data to only these wards and only 2015, and have replicated the analysis from the previous post, this time including ward-level endorsements. Figure 6 shows the results. The endorsement of the ward is more important than even the top ballot position: it brings a baseline candidate a boost of 0.9 percentage points, and the top ballot position only a boost of 0.7. This number is lower than the 2013 number from the previous post because 2015 had many more candidates and this is a subset of wards where the ballot position effect is weaker. (Note that because this is a single year, I cannot differentiate the effect of the top ballot position from traits of the candidate who was in it, and in 2015 top-ballot winner Scott DiClaudio was a newsworthy candidate). Among these wards, the Inquirer endorsement was about as helpful as the top ballot position. And the Democratic City Committee’s effect has dropped significantly, indicating that much of the Party’s effect is channeled through local ward leaders. (Importantly, it’s not that the DCC doesn’t have an effect, but that it is most effective when ward leaders adopt its endorsements. When a ward leader endorses someone different, it’s the ward leader’s endorsement that wins out.) 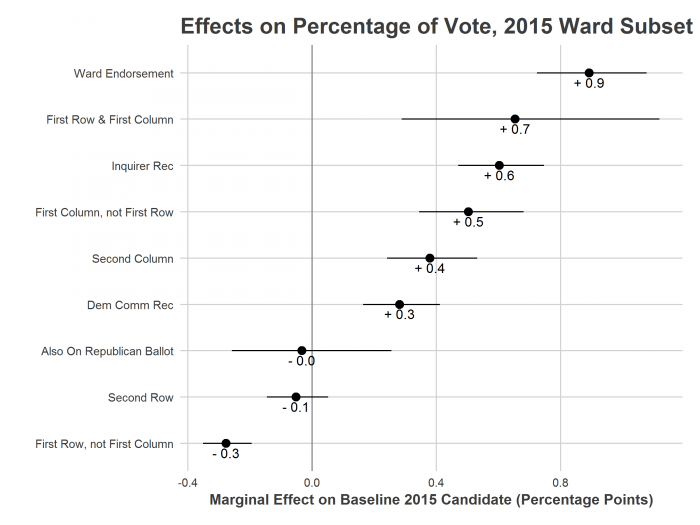 We shouldn’t make too much of this analysis; the limitations of the data are significant. And notice that the top ballot position still has the second-largest effect, even in this subset of wards in which we expect it to do particularly poorly, and in a year in which that position was filled by a censured candidate. But the analysis provides at least suggestive evidence that ward endorsements may have the most power of all.