The Power of Residential Growth 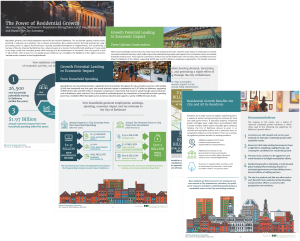 Econsult Solutions, Inc. was hired by Baltimore Development Corporation (BDC) to quantify the benefit of residential growth on the Baltimore and Maryland economies, to determine whether that benefit represents a positive impact on existing residents, and to make the case for efforts that will foster population growth in the city. Based on the residential growth potential over five years, we estimated the total economic impact from household spending as well as the impacts from the construction spending due to the creation/renovation of new household units. The cumulative economic impact is significant, from household spending alone, it represents nearly $2 billion in economic impact, supporting 11,000 jobs and $128M in city tax revenues annually. In addition, we analyzed the return on investment of each new household to the City, in terms of city expenditures versus tax revenues generated. We found that new residents were well worth the investment, as they represented a small increase in expenditures, but a much larger generation of tax revenues per household. The report also examined growth from an economic equity lens and determined that it provides positive benefits to existing residents through local economic opportunity, funding for public services, and the presence of more amenities. Finally, ESI completed a benchmark analysis against a peer group of cities and identified categories of interventions that were successfully implemented by other municipal governments. As a result, we landed on the following five guidelines for Baltimore’s resident growth efforts: