Digging In: Women in Agriculture

Last week, during yet another Nor’easter, I found my mind wandering to summer weather – and the fresh produce that comes with it. In order to bide time until the weather improves, I began researching CSAs (Community Supported Agriculture), or Farm Shares, with pick-ups in the Philadelphia area. During my research, I noticed that a high number of farms supplying CSAs were owned or co-owned by women. In order to round out women’s history month on Present Value, I decided to dig into trends of women in agriculture, specifically crop and animal production, and the economics of those changes, at both the national and state levels. I wanted to map the distribution of women farmers and how the percentage of women farmers has changed over time. In order to contextualize this data, I first conducted a high-level SWOT (Strengths, Weaknesses, Opportunities, and Threats) analysis of women in Ag. What I found is that while there are positive trends for women in agriculture – the number of women farmers has grown considerably (from 26 to 31 percent of operators between 2002 and 2012), women make up an increasing share of principal operators, and many women farmers are well positioned to capitalize on consumer demand for local and sustainable foods – ongoing challenges remain. Women primarily operate farms with less than $10,000 in annual revenue, making them more vulnerable to market changes, and face difficulties accessing the capital needed to scale operations. 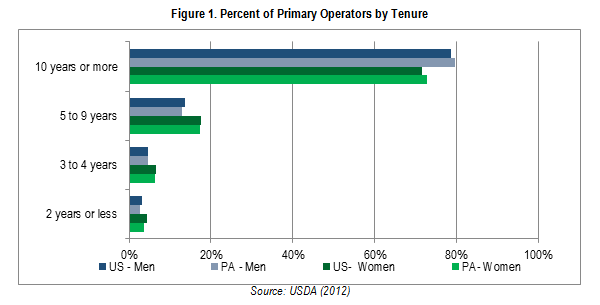 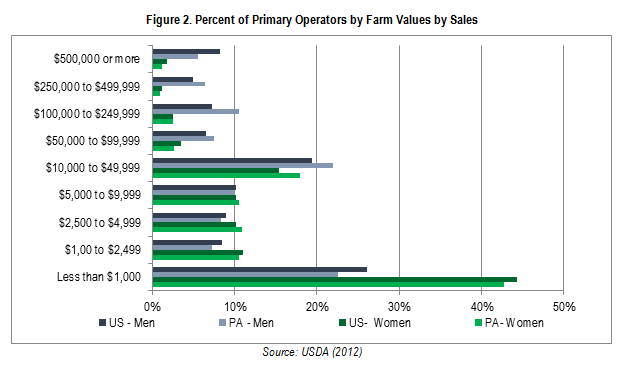 On average, female-operated farms are less than half the size of male-operated farms – 210 vs. 452 acres. The gaps in farm sales and farm size exist despite the fact that men and women are almost equally likely to have a principal occupation other than farming. In 2012, 57 percent of women principal operators had a primary occupation other than farming, compared to 52 percent of men.

However, there are programs available for new farmers to address these issues, including the U.S. Department of Agriculture (USDA) Farm Service Agency’s (FSA) Direct Farm Ownership loans for beginning farmers and ranchers. The FSA sets aside a portion of its funds for women and other historically underserved groups including African Americans, Hispanics, and Indigenous peoples. At the state level, Pennsylvania’s Agricultural Conservation Easement Purchase Program can connect new farmers with prime farmland that has been protected through conservation easements. The Pennsylvania Department of Agriculture and organizations like the Pennsylvania Association for Sustainable Agriculture also offer grants for new farmers. In addition to Pennsylvania’s capital access programs, I wanted to understand women operator trends in the state. Women account for 30.5 percent of the state’s farm operators. At the country level, the percentage ranges from 22.4 percent in Cameron County to 41.9 percent in Pike County. There are strong concentrations of women operators in the Philadelphia region – an area with a significant number of small, direct-to-consumer farmers.

In 12 counties, the growth in women farmers offset the decline in male farmers, with 49 counties experiencing overall growth in operators between 2002 and 2012. The change during that period ranged from a 20 percent decline in Leigh County to a 220 percent increase in Philadelphia County.

In total, the share of female operators increased in 62 counties – due to higher growth rates in women operators and/or lower declines.

There are opportunities to further the growth of women in agriculture, towards gender and income parity. However, significant challenges in establishing, scaling, and sustaining farm production remain. If you want to support women in agriculture through alternative distribution systems, you can check out a list of Philadelphia-area CSAs here or search for ones in your area here. This analysis uses the USDA Census of Agriculture. The USDA National Agricultural Statistics Service (NASS) conducts and publishes the Census of Agriculture every five years. The 2017 Census of Agriculture is currently underway, with results to be released in February 2019. I therefore analyzed the most recent USDA Census data from 2012, along with the 2002 and 2007 Censuses to measure longitudinal change.

Alison Shott, Ph.D., is an Associate Director at Econsult Solutions, Inc. At ESI, Alison works in the areas of public policy, land use, economic development, real estate, transportation, and energy. Alison received her Ph.D. in Political Science from the University of Western Ontario.