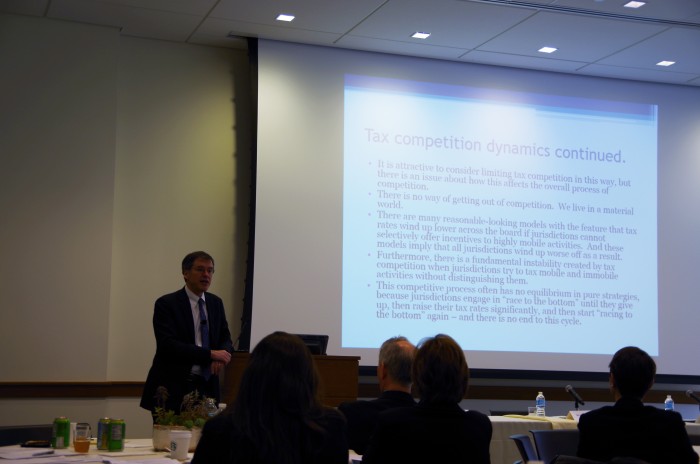 On April 27, 2016, Drexel School of Economics and Econsult Solutions, Inc. (ESI) had their 2nd Annual Conference. This year’s topic of Urban Tax Policy brought together experts whose experiences span academia, government, and the private sector. An engaged audience heard about a diverse set of tax issues, starting with a keynote on Tax Policy and Competition, followed by a panel on Tax Administration, and finished with a panel on Tax Policy and Economic Development.

After a gracious welcome from our hosts at the LeBow College of Business and Drexel School of Economics, as well as warm introductions from ESI President and Principal, Dr. Richard Voith, the event kicked off with a presentation by Dr. James Hines. As an expert in law and economics and tax policy, Dr. Hines used his keynote to delve into tax incentives and business competition.

Dr. Hines did not shy away from the controversy of tax incentives and tax havens that has been discussed heavily by media outlets across the globe. Instead, he confronted the controversy head on at the top of his presentation, stating that tax policy will always be controversial. His purpose, though, was not to focus on the controversy, but instead to explain how tax incentives have worked on a local, national, and international level.

With a quick review of pertinent economic theory, he dove into what he saw as prime examples of countries using tax incentives to encourage business and economic activity. Evidence has shown that the lowest taxed countries receive higher levels of investment than would be expected, with the strongest examples being tax haven countries. Dr. Hines highlighted Ireland as a prime example of how implementing favorable tax rates for businesses can spur enormous development. Ireland was once one of the poorest countries in Europe. After they lowered their tax rates, their GDP started to skyrocket, encouraging development. The evidence is abundant in showing the positive effects tax incentives have on bringing in business and supporting economic growth.

Next he explored how tax incentives have worked across counties and cities in the U.S. Evidence indicates that areas are most likely to offer tax incentives if they are: less urban, have higher property tax rates, low income, manufacturing centered, and have younger populations. Manufacturing especially is an important factor, since the industry is highly mobile, and the more mobile the industry, the greater the need to incentivize the industry.

Lowering tax rates, though, is not effective by itself. Dr. Hines emphasized the importance of good governance along with effective tax policy. He was also quick to note that tax policy should never be one size fits all. Tax policy is complex in nature and should be handled as such.

His presentation wrapped up by considering the future of tax competition. The current trend is for countries to lower tax rates, but the U.S. has not followed along. Dr. Hines strongly suggested that the U.S. must rethink its tax policies to stay competitive in the growing world market. He also made a call for action – as a country we must elevate the public discourse around tax policy and have more conversations like what was presented at the Drexel / ESI conference.

Read about the Panel I: Tax Administration and Panel II: Tax Policy and Economic Development.