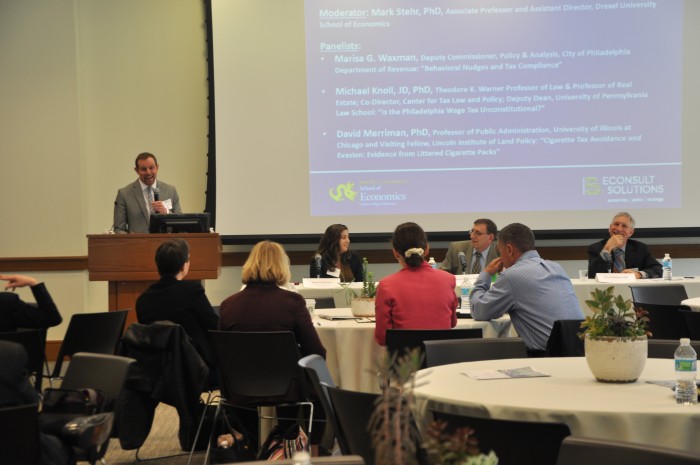 For the first panel of the Drexel / ESI Conference that was held on April 27, 2016, our group of tax experts discussed issues pertaining to tax administration. Dr. Mark Stehr, Associate Professor and Assistant Director of the Drexel School of Economics moderated the panel. First, Marisa Waxman, Deputy Commissioner of Policy and Analysis for the City of Philadelphia Department of Revenue (DOR), discussed her work with the city to find ways to get better responses from taxpayers in the city, followed by Dr. Michael Knoll, Deputy Dean at the University of Pennsylvania Law School, presenting on the legal implications of Philadelphia’s wage tax. The panel finished with Dr. David Merriman, Professor of Public Administration at the University of Illinois at Chicago and Visiting Fellow at the Lincoln Institute of Land Policy speaking about his unique research on cigarette tax avoidance and evasion.

As the 5th largest city in the U.S., Philadelphia collects billions of dollars in taxes every year. Marisa Waxman oversees this collection and must find ways to increase the tax collection efficiency and the level of response by Philadelphia residents. Her job consists in “helping Philadelphians make better decisions”. To do this, she engages in the field of behavior economics, which marries economics with psychology.

The DOR has invested in research to see how they can increase participation in tax and water assistance programs as well as increase payments from overdue and delinquent tax accounts. This involved changing the messages and mediums of the notices to see what would work best. Through these experiments, the DOR was able to increase the number of responses and the timeliness of responses through simple changes such as using eye-catching green envelops and simplifying the language in the notices. The DOR will continue these experiments and hopes to scale-up their results.

Our next panelists, Dr. Knoll, shifted to the focus to the highly controversial wage tax in Philadelphia, showing the precedent to the argument that the tax is unconstitutional. He reviewed a recent Supreme Court case, which looked at the possible violation of the dormant Commerce Clause, which claims that states cannot discriminate against or impose an undue burden on interstate commerce. In this case, Wynne v. Comptroller (Maryland), it was discovered that there were internal consistencies between how much a Maryland resident is taxed in-state versus out-of-state. This same inconsistency, as Dr. Knoll explained, can be seen with Philadelphia residences. Philadelphia must do something to amend the unconstitutional tax, either reforming or getting rid of it completely.

The final presentation by Dr. Merriman followed his unique research methodology on cigarette tax avoidance. Government and academics alike are interested in the effectiveness of the increasingly population cigarette tax, which has been instituted in many major cities including Chicago and New York City. When considering how to test the levels of avoidance of the tax, Dr. Merriman became inspired while strolling down the streets of Chicago. He noticed littered cigarette packs lined the streets and on these cigarettes pack are stamps indicating which state, county, and/or city they were purchased. He decided to use the streets to collect his data and collect littered cigarette packs.

He performed this study several times and across different metropolitan areas. Through his studies, he was able to calculate the levels of avoidance in many major cities and how the tax affected revenues and consumption. He found that there were still increased levels of tax revenues even though consumption decreased and tax avoidance increased.

To finish his presentation, he touched briefly on the implications of the soda tax, applying his cigarette tax research to the controversial soda tax that has been proposed by Mayor Kenney. He assumes that there will be a high level of avoidance with easily accessible areas outside the city and expects similar results for the affect of soda tax avoidance as he observed with the cigarette tax. Although consumption will likely decrease in a significant way, there will be an increase in revenue for the city.

Check out the keynote presentation and Panel II: Tax Policy and Economic Development.