Employment in Construction: Where are the Skilled Workers?

Over the past several years the number of employers, who have indicated that they were having trouble filling positions for skilled construction workers, has risen from reports of a few isolated cases around the country to reports of a widespread shortage in the industry.

The National Association of Home Builders (NAHB) has conducted several surveys about labor shortages in construction among its members over the past few years. NAHB reported that in its third quarter 2015 survey of remodelers, 80% of respondents reported a shortage of finished carpenters, up from 72% in its third quarter 2014 survey. Increases in reported shortages were noted in other specialties such as electricians—44% vs. 37% in 2014, and roofers—45% vs. 35% in 2014.

These survey results have been reaffirmed by informal discussions that we have had with general contractors and other construction companies. Note that the reported shortage is for certain skilled workers, not all skilled workers and not unskilled workers. Some of the available employment data may mask these shortages as the data often do not distinguish between skilled and unskilled workers.

Where Did All the Skilled Workers Go?

As the numbers indicate, there was a reduction of 2.3 million employed workers in construction from peak to trough in just under five years. Of course, not all of the workers who lost employment were skilled workers. Construction companies tried to retain their best workers for as long as possible, but as the construction recession continued, many were forced to let those workers go.

The Aging of the Construction Workforce 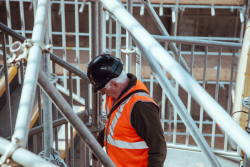 However, even more telling is the shift in the age distribution among employed construction workers. As a percentage of workers, the peak for the two younger cohorts was in 2002 (the earliest the data are available) with 13% of workers ages 16-24 years and 76% of workers ages 25-54 years. That year was the low point for workers ages 55 and over, 11%. The percentage of the youngest workers (ages 16-24 years) began to fall in 2007, hit a low in 2010, and has since stabilized at a little above 10%.

More dramatically, the percentage of mid-age workers (ages 25-54 years), the ones from whose ranks are most often drawn to replace skilled workers leaving the industry (generally due to retirement), held steady until 2012, then began falling steadily from around 75% to 71% in 2016.

As a result, there has been a shift to a greater reliance on older workers (ages 55 and over) to fill positions in the construction workforce. Recovering from a post-recession low of 15% in 2011, their percentage has grown steadily, hitting a record high 19% in 2016. Thus, the industry is relying heavily on its older skilled workers, who are headed to retirement without sufficient younger workers to replace them.

After the Construction Recession Employment

A 2015 Census Bureau research paper (Where Did All the Construction Workers Go?) suggests what happened to many of these workers. According to the study, roughly 60% of those construction workers who became unemployed for more than three months between 2006 and 2009 had not returned to the construction industry by the end of 2013. It would seem to be very unlikely that many of those workers subsequently returned to the construction industry. Among the findings regarding these workers (along with our observations, inferences, and analysis) were: 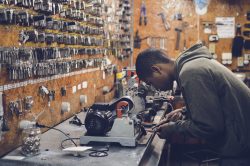 Now that construction activity has been on the upswing for several years, suspended training programs have been restarted, existing programs have been expanded, and new programs have been started. However, given the length of time to train a worker for the needed skills, the inflow of newly trained workers has lagged demand. Also, workers successfully completing a training program still require significant time in on-the-job training to become truly proficient in their area of expertise. Depending on the skill, this can take anywhere from two to three years or longer under the tutelage of a veteran skilled worker. And, as noted, those veteran skilled workers are in short supply.

The Challenges of Today’s Construction Industry 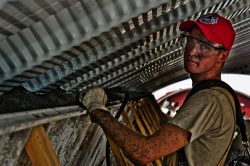 There are three problems facing construction’s ability to attract younger workers. First, there is the perception that construction work is dirty, exhausting work under adverse conditions, such as cold weather, with long hours. This is certainly the case in some situations. But at the same time, there are many jobs in construction that do not fit this paradigm. In some of these jobs, the work occurs predominately or completely in an office or factory-like setting.

Second, young people have observed or are aware of the relatively recent recession in construction and are reluctant to enter a field with the possibility of long periods of unemployment. Certainly any sector of the economy faces the prospect of a downturn. A national recession usually adversely affects all sectors of the economy. However, construction’s outlook is brighter than most partly due to its recent recession. Many areas of construction are below their long-term trends, suggesting that, short of a national recession, demand will remain strong for a number of years. In particular, construction of single-family housing units is rising but is still significantly below the nation’s long-term needs. To the extent that demand for single-family houses lags for whatever reason (fear of homeownership, difficulty in qualifying for a mortgage, etc.) demand for apartments, hence for multifamily construction projects, remains strong.

Third, there is the problem that we classify as the “mothers, don’t let your children go into construction” syndrome. This is the result of the argument that every young person should go to college. It is certainly true that many of the jobs in our increasingly high tech economy require additional learning/training beyond high school. For many people this does mean college. But lack of a college degree does not necessarily condemn an individual to a low paying job if they have the proper training and desire in certain fields. Construction is clearly one of these fields.

It is true that construction employs a number of unskilled (or should we say, low skilled?) workers who may not require even a high school diploma. These tend to be low wage jobs with limited prospect for advancement (although a hard working individual who is willing to learn on the job and acquire skills can do extremely well over time). But more and more of construction jobs require the ability to work with computers and math. Thus, although a college degree is not necessary, advanced skills acquired in a technical school or a two-year college will well serve a potential worker and provide for a good starting salary.

After a few years, a skilled worker can earn annual income in the mid to high five figures and a six figure income is often possible. Here are a few examples of average annual income in 2015 from the May 2016 Occupational Employment Statistics from the BLS report for the following construction occupations:

Seasonally adjusted average hourly earnings (AHE) in construction, which includes both skilled and unskilled workers, are typically a little over 9% higher than overall private AHE. In the BLS April 2017 employment report, March construction AHE were 9.2% higher than private AHE.

So how are employers coping with the shortage of skilled construction workers?

The very short run – the supply of skilled workers is largely fixed (in economic speak, inelastic supply). As a result, wages for skilled workers have been rising. Construction firms have also been forced to slow the pace of their projects as they move their available skilled workers from one project to the next. The larger firms are also exploring the use of technology—using machinery (capital) to replace some work functions, using software to better schedule their workers, using more prefabricated parts that easily fit together on site, and in some rare cases using more modular units that can be assembled at the worksite.

The medium run – the supply of skilled workers is more flexible (more elastic). As newly trained workers obtain employment, wages in those crafts will rise more slowly as the shortage is lessened. More firms, including smaller ones, will have time to explore and invest in capital that leverages the output of the skilled workers they do employ.

The long run – the balance between the supply of and the demand for skilled labor will be dictated by the interest of young people to enter into the construction industry, the availability and success of training programs, and the cost of capital equipment that either replaces skilled labor or increases the productivity of skilled labor relative to the wages for skilled workers.

Special thanks to Ken Simonson, Chief Economist, Associated General Contractors of America (AGC), for his helpful comments and suggestions.