It seems as if each day passes with a new crane being erected in Philadelphia. With the city amidst a building boom, we thought it would be a good idea to reflect on some of our favorite buildings, both new and old in the city.

With the hustle and bustle of daily life, it can be easy to occasionally lose sight of the relevance these places on our list have had in defining Philly’s character, growing the city both upward and outward, attracting new visitors and residents, and making the way for even more exciting and innovative spaces. 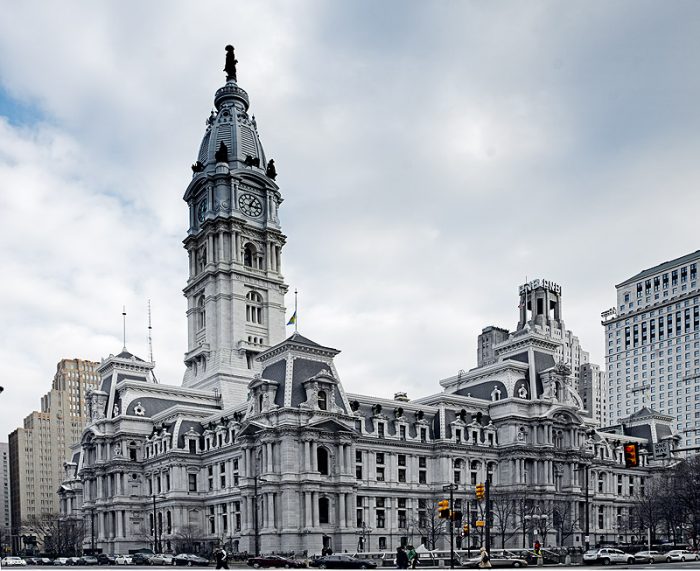 The largest municipal building in the United States which is also the largest and tallest masonry building in the world, contains over 14.5 acres of floor space and almost 700 rooms. It’s an icon unlike any other. Construction took place from 1871 to 1901, and believe it or not, there was a point in its time when City Hall was considered so horribly outdated and ugly, (Philly is a tough crowd) that plans to demolish it were considered. Lucky for us, the price tag for tearing down the thick limestone, granite, and marble walls that make up the civic space and its 250 sculptures would have bankrupted the city and left us without such an iconic feat of engineering and beauty. The latest enhancements City Hall’s Dilworth Plaza have created a new gateway for public transit and outdoor recreational space for visitors to enjoy. 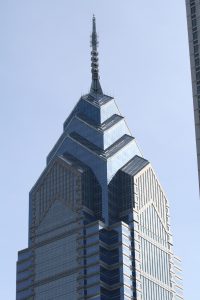 The first building widely recognized as breaking the “gentleman’s agreement” is groundbreaking in many ways. The announcement of plans to build taller than City Hall was met with considerable opposition (I told you Philly is a tough crowd). Thankfully, public opinion came around and the building was completed in 1987 signaling the beginning of a new era for the city’s growth. Offices, condominiums, and hotel rooms make up most of the building, with an observation deck recently added that offers visitors a 360-degree view of Philadelphia and the surrounding region. 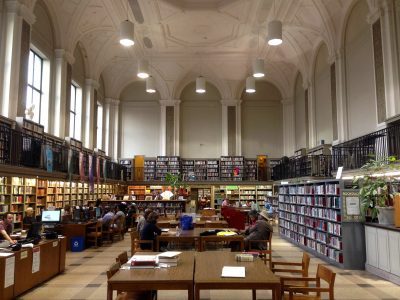 Designed by Julian Abele, the first African American graduate of the architecture program at the University of Pennsylvania, the four-story Beaux-Arts building has been open to the public and providing residents with educational resources since 1927. The interior rooms are as ornate and historic as the collections the building houses.

In 2008 the Central Parkway location added a 5,000 square foot green roof to its rooftop terrace. This modern feature helps mitigate stormwater runoff and was part of Mayor Michael Nutter’s initiative to make Philadelphia one of the greenest cities in America.

FMC Tower, which derives its name from FMC Corporation, is another mixed-use building that offers office, retail, and residential space. Currently the tallest structure outside of Center City, the tower expands Philly’s skyline westward and indicates West Philadelphia’s continued growth. State-of-the-art amenities have been built into the tower, providing tenants with a swimming pool, outdoor greenspace, movie theater, and gym. 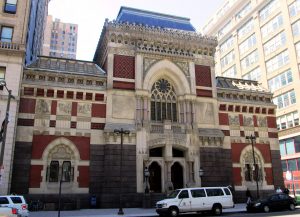 Regarded as one of the most magnificent Victorian buildings in the country, the Furness Hewitt Historic Landmark Building houses the Pennsylvania Academy of the Fine Arts, the oldest art museum and art school in the United States, along with its permanent collection and private sculpture section for students. The building is known for its colorful red and black brick patterning and Grand Stairhall interior with gothic arches and a vaulted ceiling.

Originally opened in 1933, the art deco structure connects Philadelphia locally and beyond, as one of the busiest transit hubs in the United States. The station will become even more important to the vitality of the city over the next 40 years as the 30th Street District Plan moves forward. The comprehensive plan aims to double the station’s current capacity, build 19 million square feet of new development in the surrounding area, house between 8,000 and 10,000 new residents, and create 40 acres of new open space. 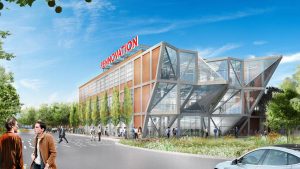 The Pennovation Center is a business incubator complete with laboratories, creative spaces, and co-working areas. Aside from its unique design and aesthetic, the building is also LEED Gold certified for its environmental design. The state-of-the-art structure provides entrepreneurs with the necessary resources and space to foster creativity and ingenuity that will hopefully expand our local economy.

In 1890, the Philadelphia and Reading Railroad Company purchased the 1110 block of Market Street to consolidate its four terminals, and creating dedicated space for Reading Terminal Market, the nation’s oldest operating farmer’s market which has been continuously operated since 1892. Through the years, Reading Terminal Market has faced several challenges (structural deterioration, 20% vendor occupancy, bankruptcy, and possible demolition) but has remained a staple in providing locally sourced, quality food.

By the mid-80’s, revitalization efforts were well underway to restore the market to its former glory. Today, Reading Terminal Market is considered one of the greatest public markets in the America, offering cuisine that spans from soul food to Middle Eastern and Asian dishes to Philly Cheesesteaks and Pennsylvania Dutch fare. An ESI favorite is Beiler’s Donut stand.

The Barnes Foundation opened the doors to its 93,000-square-foot, state-of-the-art museum in 2012. Designed by Tod Williams and Billie Tsien Architects, the modern monumental edifice accomplishes The Barnes many goals, the primary of which is to conserve Dr. Albert C. Barnes world-famous art collection. The design of the building and its four-and-a-half acre landscape synthesizes art, nature, education, and aesthetics in the heart of the city. While it is representative of 21st-century sensibilities, the galleries within the museum are as intimate and thoughtful as those where the collection was originally installed, in Dr. Barnes early 20th-century residence in Merion, PA.

While not officially complete, Comcast’s second skyscraper should not go unnoticed. How could it go unnoticed?! The planned 60-floor building will eventually be the tallest building in Pennsylvania, and ninth-tallest in the Western Hemisphere. The Innovation and Tech Center will house television studios for NBC and Telemundo, retail space, a hotel, and be home to Comcast’s growing workforce, continuing to expand Philadelphia’s skyline upward and offering new employment opportunities.

We hope you have enjoyed our list! While these are some of our favorites, they are just a fragment of the amazing places that make up our region and push Philadelphia to new heights.

Mike Daly  is a Marketing Associate at Econsult Solutions, Inc. Mr. Daly is responsible for enhancing ESI’s brand and work through traditional and social media marketing, content development for the web, and managing the ESI Blog.

Cayde Tanzil is a Marketing Assistant at Econsult Solutions, Inc. She is responsible for updating and curating website content, assisting with proposals, designing marketing materials, and growing and maintaining ESI’s traditional media and social media presence.