Where can we Expect the First Major OZ Activity in Philadelphia?

Using the PHI to Identify Investment

With all of the buzz about the federal Qualified Opportunity Zone (QOZ) program, we thought it would be interesting to see how various neighborhoods—census tracts, actually, with designated QOZs are behaving from a single-family housing perspective. National research describes a spike in sale prices in houses in QOZ neighborhoods, growing by more than 20 percent year-over-year compared to a 3.5 percent growth rate for non-eligible properties (Zillow), after the program was announced.

We wondered what the data show in Philadelphia, so for this month’s Present Value post on the Philadelphia Housing Index (PHI), we applied our PHI model to census tracts that are QOZs to see how this new program may be impacting single-family home transactions. As a refresher, the federal Tax Cuts and Job Act in 2017 established QOZs as select census tracts in economically-distressed communities which could receive private investments through Opportunity Funds. Opportunity Funds were funded via previously unrealized capital gains that would receive preferential tax benefits if invested in these zones for at least 5 years. In June 2018, the selected census tracts were announced, with 300 QOZs across Pennsylvania and 82 in Philadelphia.

While on average, Philadelphia’s QOZs experienced 14 percent growth year-over-year since the QOZ program was announced, it’s important to note that these census tracts have already been showing significant growth before the QOZ designation was announced. Although the QOZ census tracts recorded a historically lower PHI than the city’s overall from 2001 to 2012, the post-Recession redevelopment boom in Philadelphia’s Greater Center City area has resulted in this subset of Philadelphia neighborhoods experiencing substantial investment since 2013 (more on that in a moment). So by 2018, when the QOZs were announced, these census tracts on a whole had already recorded an 18% premium over the citywide PHI. That premium rose to 26% over the citywide PHI.

What does that premium look like across the city’s OZs? The map below shows whether the PHI of census tracts designated as OZs are above or below the citywide average of around $126,000, as of April 2019[1]. 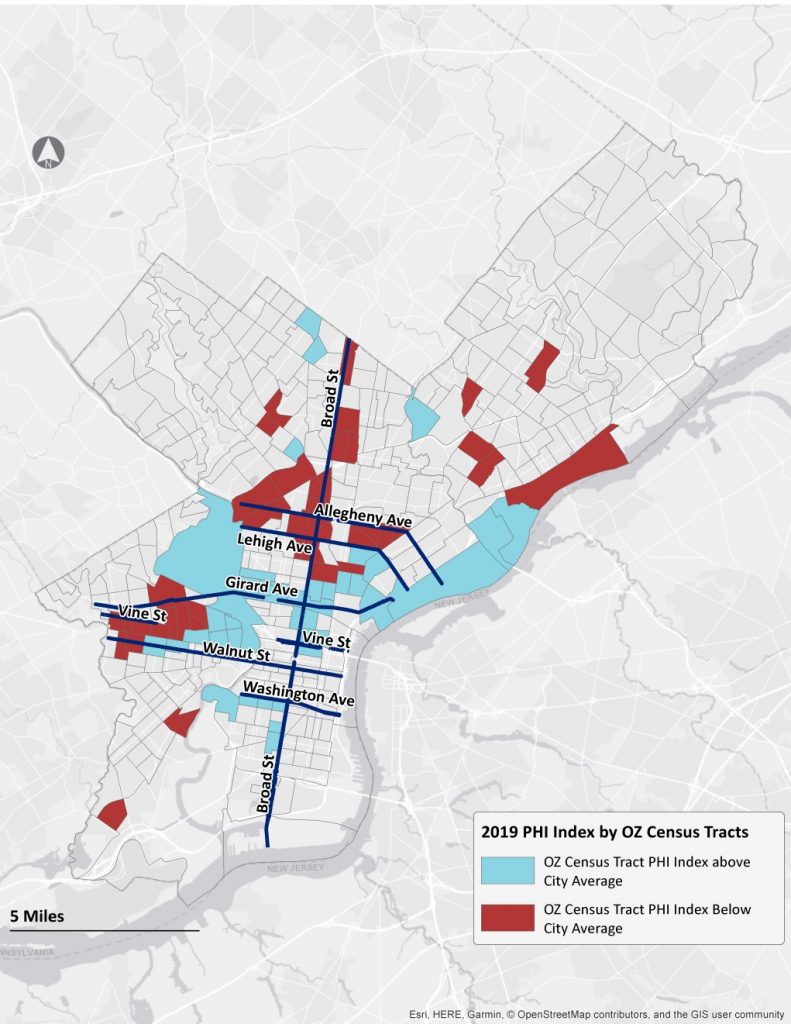 More interestingly, the map below shows whether the PHI percent change in the past five years[2] by census tracts is above or below the city average (which was around 32% increase from 2015 to 2019). Over half the OZs’ PHI grew more than the city average. Some of these will come as no surprise—Fishtown, University City, Point Breeze—but other areas like around North Broad and West Kensington show a mixture of above and below average growth compared to the city as a whole. 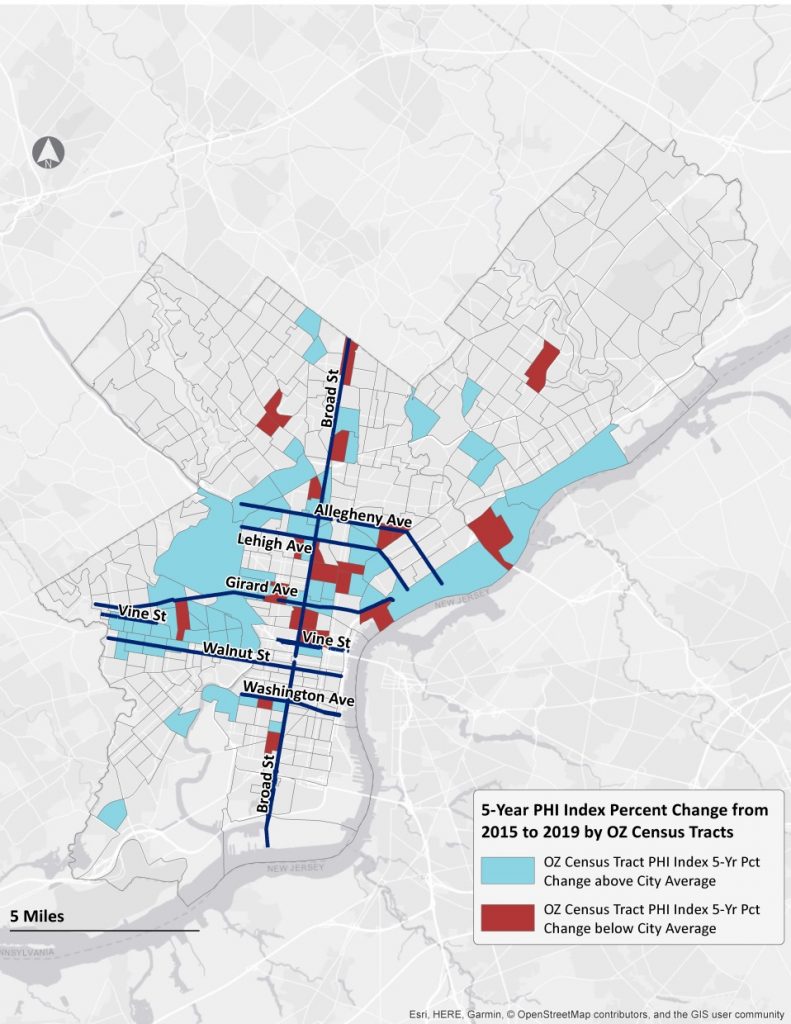 You can examine the PHI within QOZs for yourself by taking a look at our PHI visualization. Do you have questions about any of Philadelphia’s 82 OZs or want to know more about what type of development is already happening in these areas? Send us an email about what you’d like to learn more about in a future Present Value blog.

Jing Liu is a senior analyst at ESI. She specializes in spatial analysis, quantitative analysis, and data visualization. Prior to joining ESI in 2016, Jing received her Master’s in City Planning and Urban Spatial Analytics from the University of Pennsylvania.